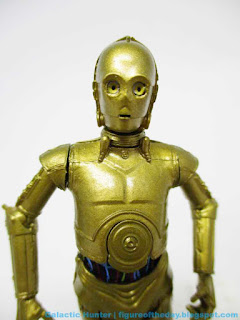 Bio: C-3PO, sometimes spelled See-Threepio and often referred to simply as Threepio, was a 3PO-series protocol droid designed to interact with organics, programmed primarily for etiquette and protocol. He was fluent in over six million forms of communication, and developed a fussy and worry-prone personality throughout his many decades of operation. (Stolen from Wookieepedia. Packaging has no bio.) 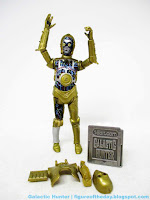 Commentary: When hasbro decided to do reruns, I wasn't terribly happy - but I do appreciate some of the figures that came out got a fresh coat of paint and were things a wide audience might want. Around here, it seems very few reissues sat around - and See-Threepio (C-3PO) actually has less paint than the 2010 See-Threepio [FOTD #1,515]. His interior is cleaner, his exterior lacks the darker gold detailing, and his features remain undocumented. At the time, I had no idea the 2010 version had a removable let - heck, I didn't even know about all the panels coming off. It wasn't necessarily obvious.

At the time, Hasbro was telling us that this was an all-digital sculpt. This was kind of a big deal at the time, because when you went to Star Wars Celebration Hasbro often had somebody out there with his tools working on heads or other little elements to show us how things were done. It's sort of like seeing a darkroom. Now that we're 11 years out from the original release - and almost a year from the reissue - this C-3PO is still pretty great. While the legs sadly can't swing forward too much at the hips to occupy your Millennium Falcon's Dejarik table, it's still great. You get 22 points of articulation and if you really want, you can pop off the head. It's more articulation than C-3PO needs (I'd say the Solo: A Star Wars Story 2-pack with R2-D2 may be the best for most display needs) but if you want Threeps standing around missing half a leg, this is the one to get. 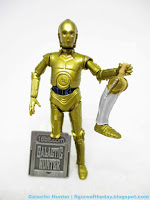 Like many figures from 2006-2011, they integrated prequel designs in original trilogy figures. Many of them were Imperial troopers with Clone heads, but C-3PO integrated the under-the-chassis wires and such from The Phantom Menace. The wires are painted similarly to the 2010 release, although the colors seem a bit brighter and the paint applications are a little less sloppy. The thing that makes this figure arguably the most interesting is that the 2010 version had a subtle, almost copper gold highlight of dirty shading on it. The 2020 model drops this, and looks all the better for it.

If you buy a version of this C-3PO on the secondary market, be sure to get a picture of the front and back first to know which version you'll get. The 2010 version is all English and only shows figures from 2010 wave 1. The 2020 has no marketing copy - just disclaimers in multiple languages as well as newer characters like Mando. The 2010 front has a grey circle "4+" in the top-left corner to indicate the age range, while the US 2010 release has it written out "Ages 4 and up" like we saw in the old days, and a "Free Boba Fett" offer sticker on most examples. Also the 2020 version ahs the SKU listed at the very top of this review. I'd say get whatever is cheaper, but the 2020 one is a bit nicer off the card. The 2010 cardback is more pleasing to look at... unless you have actual vintage Kenner figure money.