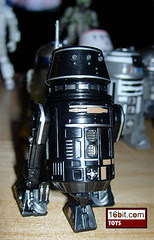 Bio: The Empire toils to complete the second Death Star after the humiliating destruction of the first battle station by the ragtag Rebels. One of the droids on the station is R5-J2, who goes about his duties unaware that its service will be very short-lived. (Taken from the figure's cardback.)

Commentary: At first, this droid was named and promoted as R5-A1. And when packaged samples surfaced, we saw Lucasfilm changed the name to R5-J2, leading to much confusion as a few books and other materials identified a black R5-D4 repaint as R5-A1 for many years. Turns out that R5-J2 is painted significantly differently from R5-A1, despite both being black. So they're two different droids-- don't let anyone tell you otherwise.

The figure is a redeco of R5-D4, and a good one. You need more Imperial stuff, right? Well, then you need this. It doesn't offer any new play features, but pretty much everything looks cooler in black. As such, even though this isn't a figure you'll find in the movies (or at least, I can't) it's still worth your while to pick up.

Collector's Notes: I have not seen this droid in any official Lucasilm shots and I believe the packaging to be photoshopped-- and it doesn't even properly match the illustration, either. As such, this figure seems to be Expanded Universe within the context of the films. So for sticklers for authenticity, there is still room to do more black R5 units down the road.