Star Wars Figure of the Day: Day 795: Oochee the Ewok 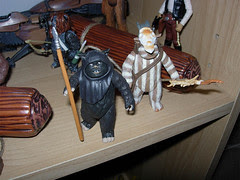 Bio:  Oochee was an Ewok warrior who, as far as can be told, did not exist by name until some point after 2000.  Research showed a single notation of the figure on a French-language site focusing on Star Wars role playing, but until this figure was in stores there were no references to the character as an Ewok.  As such, it can be assumed that Hasbro invented the character, or discovered a background character which had to be named by Lucasfilm prior to its release.  (By me.)

Commentary: What's odd about Oochee is how he came to be.   The body of the figure is that of Logray, released in 1998.  The mold was given Wicket's hood, and all were painted black-- and presto, new figure.  There's no real reason Hasbro couldn't  have done this figure a decade sooner, but they waited, and now  here it is.  In an effort to make the Endor exclusive set he came in exciting, this figure managed to capture collector attention in that it was a legit new character and not "guy you have with grass stains."  The downer about all of that is our little furry friend has but five points of articulation, and is rather tall compared to Ewoks released in and after 1996 like Chirpa, Romba, and Graak.  Still, it stand to reason some taller, huskier Ewoks exist so it's not like this figure is totally out of place with the rest of your collection in terms of scale.  It's just obvious that he's a little different, is all.  He's still awesome.

Collector's Notes: To date, the figure has been released only as a Target exclusive in 2007 and is one of few Ewoks to debut as (and so far, not change from) a store exclusive.  The boxed set itself is really quite stunning as a gift set, as a collectible, and as an example of Hasbro's work in creating excellent packaging.  You should get one.  Oochee and his oddly colored companion Wicket are reasons enough to purchase this set.  Yes, even at the high price.  Do it.

Memo from the Future: In October of 2012, Hasbro made a similar new Ewok named Wunka which is an AT-ST hijacker which looks very similar to this one.

Email ThisBlogThis!Share to TwitterShare to FacebookShare to Pinterest
Labels: Ewoks, Exclusive, Return of the Jedi, TAC