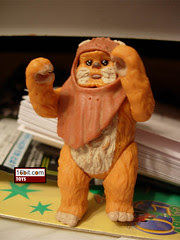 Bio: Despite the package saying it's Wicket, this is clearly modeled after Widdle Warrick and as such I'm using Widdle's bio. The Ewok Widdle Warrick, nicknamed Willy, was the second oldest son of Deej and his wife Shodu. He had two brothers, Weechee and Wicket, and one sister, Winda. Willy was Wicket's goofy, chubby, and clumsy brother. He was the black sheep of the Warrick family. Widdle received the blue wings of strength from Logray when he was part of the caravan that went to rescue Jeremitt and Catarine Towani from the gorax. (Stolen from Wookieepedia.)

Commentary: Ewoks! For years, it was assumed that collectors hate the little buggers and they were a waste of resources. In 1997, Hasbro delayed the first modern Ewoks in an effort to get Grand Moff Tarkin out a year early. And one of those molds, Wicket, was used to create this figure which I like to call "Fake Wicket" or "Widdle." Widdle was Wicket's brother in the Ewok movies and is colored differently from the cuddly little guy in Return of the Jedi, but did not appear in said movie. (Well, there are similar Ewoks, but it ain't Wicket.)

So this little guy is a repaint of a figure from 1998. He has five points of articulation, and is rather roly-poly. Since it was made before articulation became a big issue, he holds together well and is fairly durable. His spear is, well, a spear, and his hood can come off with a little effort. Due to this figure's birth taking place years before his contemporaries, he's quite large and lacks certain details you'd have seen in Graak and Romba. He's also unusually large compared to the recent Ewoks of 2006 and beyond. He still looks good with them, but it's obvious they're from different times and have a significantly different look. Odds are Hasbro will never go back and do a new Widdle, so make it a point to track this one down if you like his look. There's not much to him that you can't see in that photo.

Collector's Notes: To date, the figure has been released only as a Target exclusive in 2007. As part of a great gift set at a good price point, it's hard not to suggest you get it.