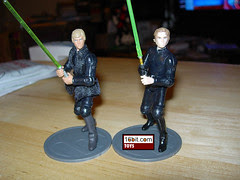 Bio: Luke's strength with the Force has helped him save the lives of his friends from Jabba the Hutt and avoid a gruesome death in the Sarlacc pit. Wrapped in a scarf to protect him from the blowing sand, he struggles through a Tatooine sandstorm with his friends to reach the waiting Millennium Falcon. (Taken from the figure's cardback.)

Commentary: The Jedi Knight costume of Luke Skywalker has been the subject of much debate for many years. Hasbro hasn't been too helpful here, as the quality of these figures varies widely and their 2007 figure seems to cobble together elements from multiple scenes rather than just making one which is appropriate to the sail barge or rancor pit. Oh, and the costume is totally off model, despite what Hasbro says. (Either it's wrong or every other version made since 1983 is incorrect. It can't go both ways.)

Avoiding some of the issues of scene-accuracy is this sandstorm version, which comes from a deleted scene. Because of this, Hasbro gets to dodge some issues of documentation in favor of a figure which looks about right. This figure builds on that 2007 version (with its 14 points of articulation) and makes some important improvements. For example, the hands don't look quite as freakish, and Luke has his black glove on his right hand. The figure isn't nearly as freakishly tan, and the face looks a bit more like Mark Hamill and slightly less like an angry, shaved blonde ape. The costume is lacking the "vest" seen on other Jedi Knight Luke figures, which is inconsistent with the photos from the set. Still, it looks good, which I guess counts.

I like this figure because it's different, has unique accessories, and pretty great articulation. He can sit, and he can stand. He doesn't fall apart easily. Oh, and you can pose him in multiple fairly awesome ways. Hasbro could do better, and they very well might later this year when another new Jedi Luke comes out, but this one is fairly decent. I'm not sorry I got this one because I'm a sucker for deleted scenes, accurate or no. Hasbro's various recent Luke figures are all over the map in how their faces turned out, and this is one of the better ones. (It ain't perfect, but I dig it.) If you own one or more skiffs you should probably get one 'cuz it's cool. I'll stop writing now.

Collector's Notes: This figure-- and many others-- continues to ship due to popularity. As a result, this figure can come with any of multiple build-a-droid parts. As such, depending on which droid(s) you're looking to collect, it's in your best interests to make sure you look or ask before making the purchase.

Despite your savaging of the other Jedi Luke (pictured), I still prefer him over this anemic neo-albino. I agree it was a good idea for Hasbro to re-package high profile characters in a way that would appeal to collectors and kids alike, I just happen to differ on which figure should receive such unrelenting scorn.