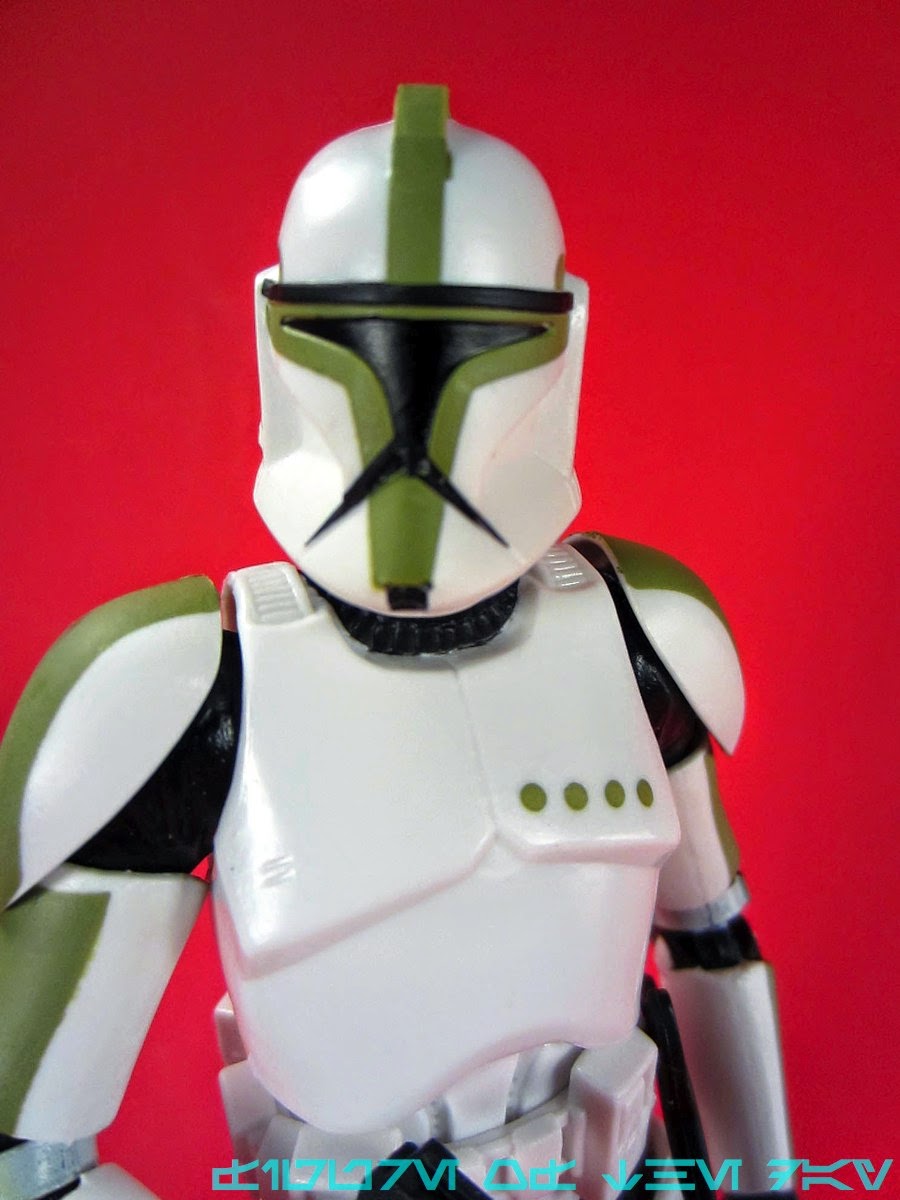 Bio: Clone Trooper sergeants are genetically engineered and trained to command Clone Trooper squads in the Grand Army of the Republic during the Clone Wars.  (Taken from the figure's packaging.)

Commentary: While Yoda is something of an obligation and the TIE Pilot is good overall, the Clone Trooper Sergeant is somewhere in the middle.   In order to make army builders and bean counters happy, repaints - or any use of existing tooling - are a great way to reuse an existing figure while giving fans something new.  Or new-ish. 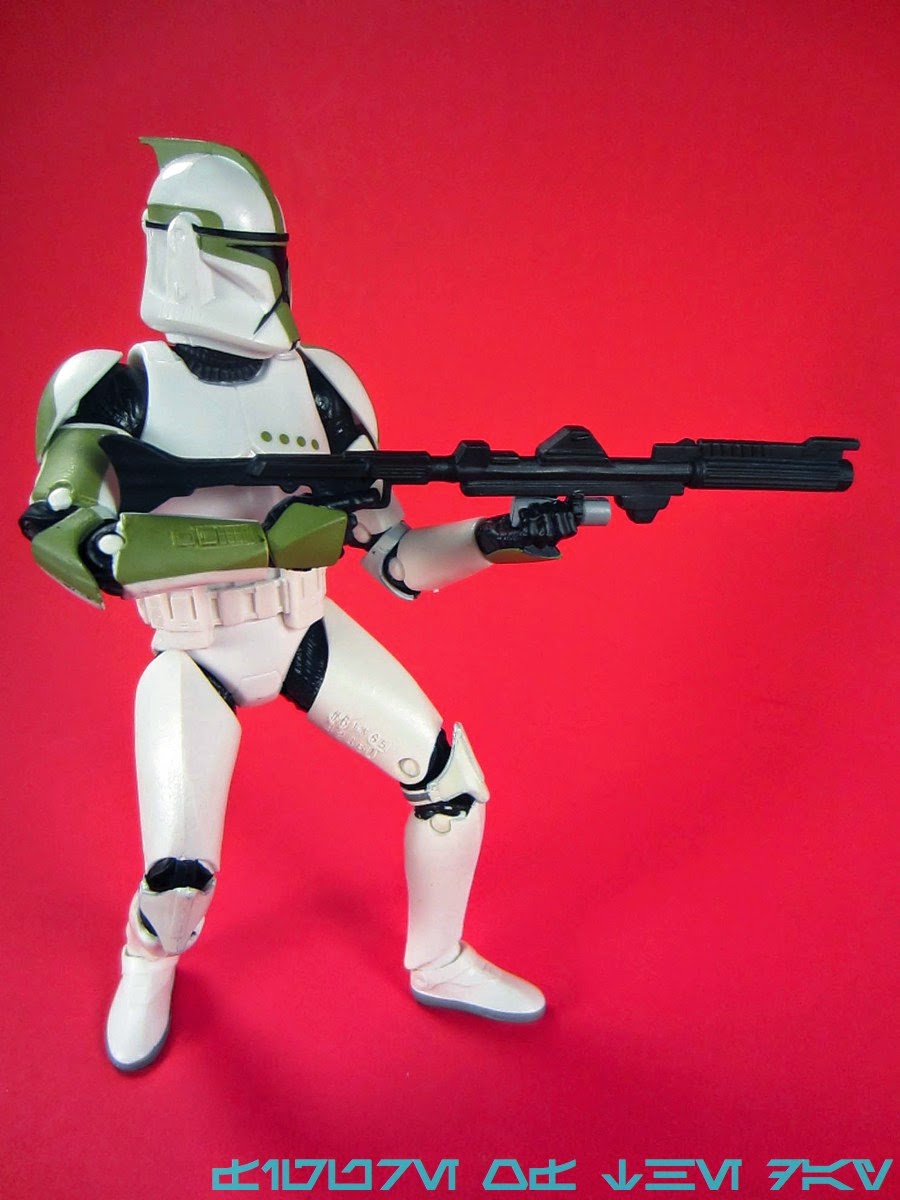 The sculpt is the same basic white clone trooper that you may have found didn't find in a store near you as part of the orange box line in wave four.   So it's good, a little chunky but that's OK.  What's most exciting about it is that one of the many color arguments in action figures continues, although it seems that the answer is now a bit more consistent.  You see, in 2003 Hasbro insisted that the Sergeants were a green color - and they also say that's what Lucasfilm told Hasbro they should be.  Since the color wasn't plainly visible in the movie not a lot of fans complained, but the 2004 Gentle Giant bust of this armor was this brownish green color.   Despite this, Hasbro continued making the figure in a brighter green color for each new release up until 2012, when they finally gave the brown one a try, despite various official renderings and other licensors continuing to make it in the brownish olive green color.  Why?  I have no idea.  Remember, in the 1990s Lucasfilm told Galoob that Han Solo "always wore black" so the Hoth parka was made as a black micro figure.  Welcome to the fun world of licensed products - if you ask me, these color changes are a big part of what makes it fun. 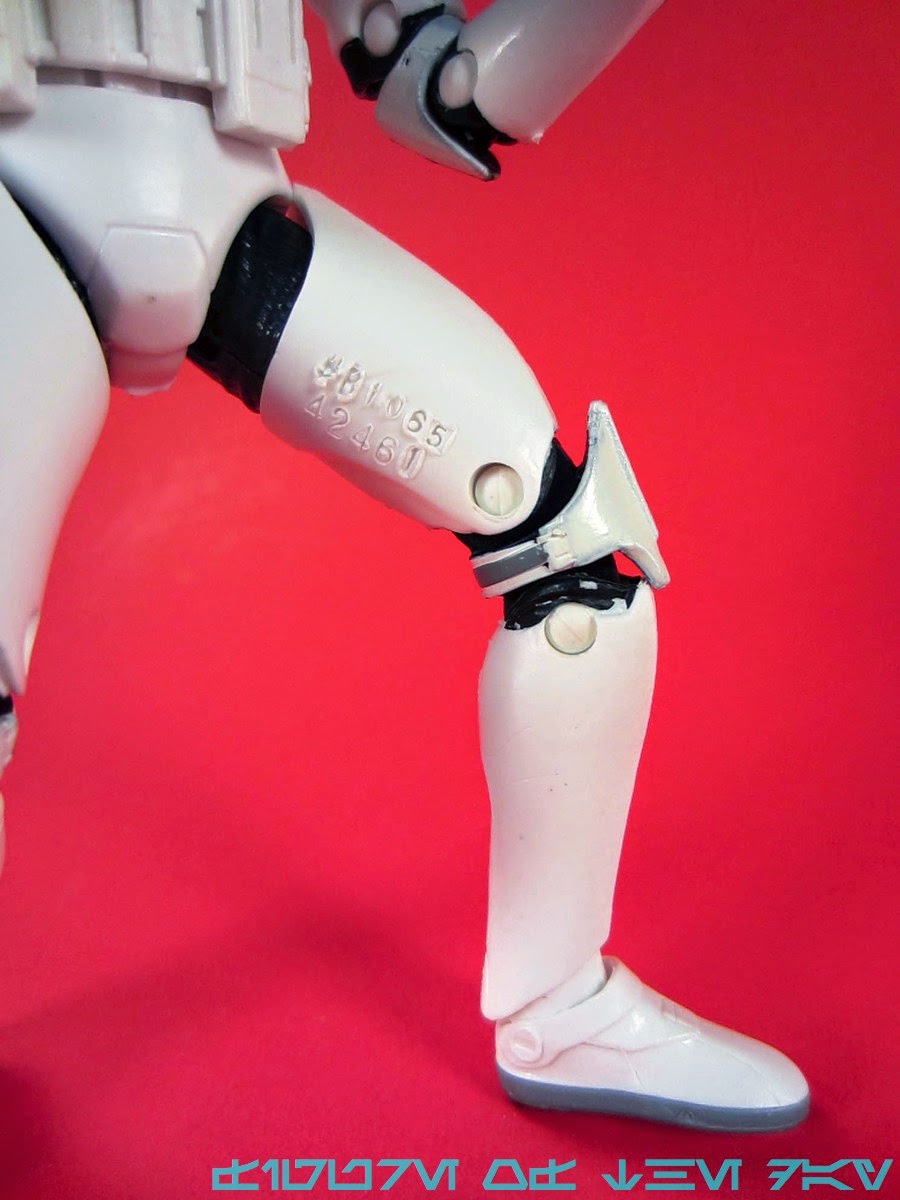 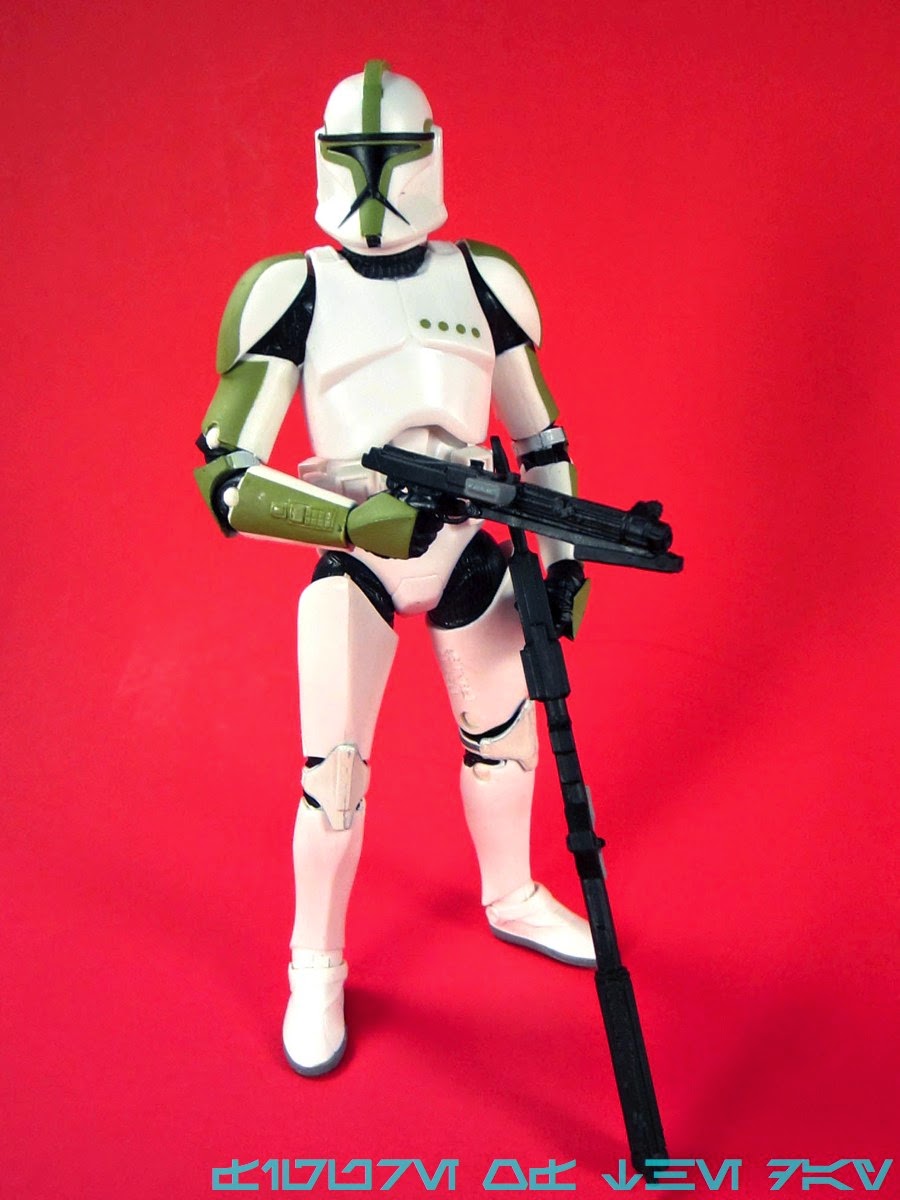 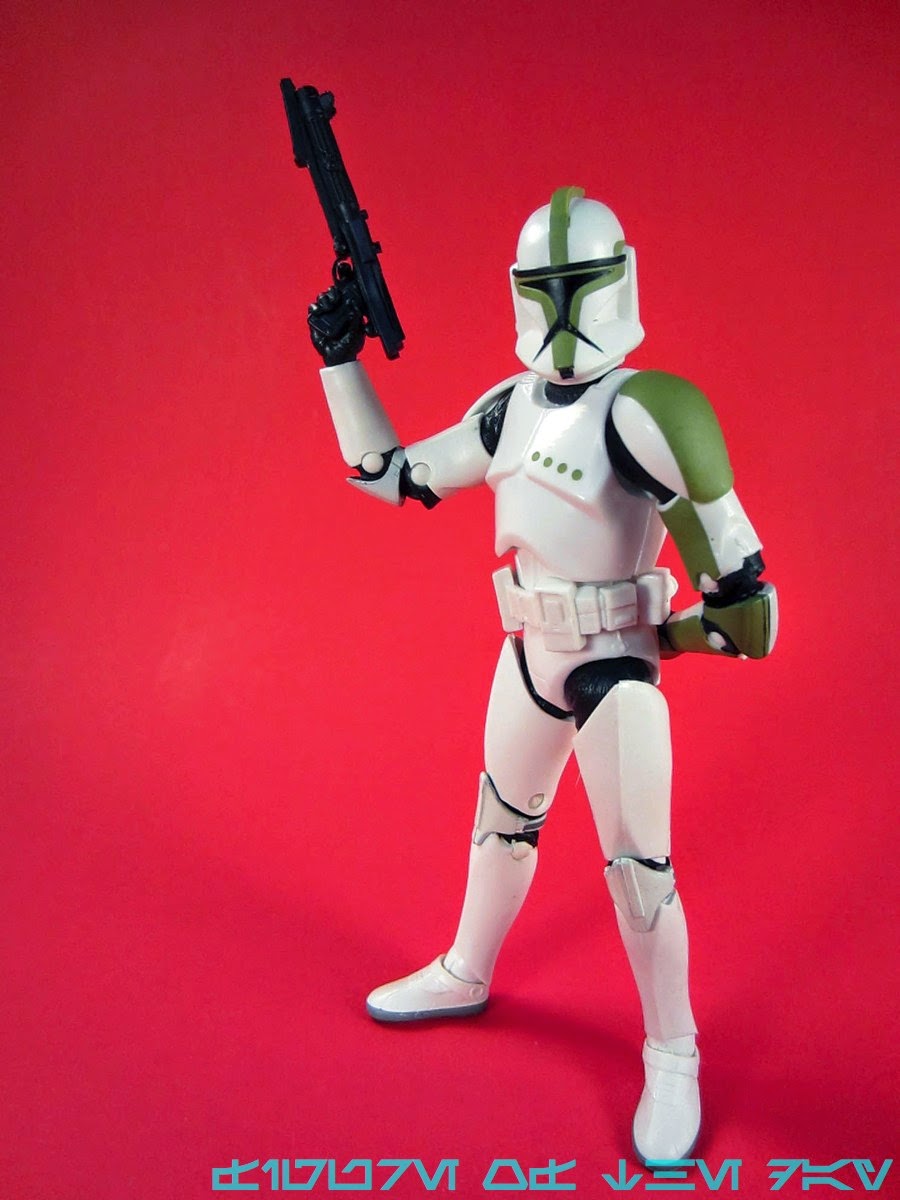 Anyway, so what's new here?  Paint.  The armor has shoulder stripes and rank pips on his chest. His helmet has a few stripes on it. The guns each have some grey on them, while the previous all-white version was unpainted.  The longer rifle - a DC-15a for those wondering - is closer to the movie reference than before, but could probably use a few more details to get it right.  The smaller blaster - the DC-15S - looks a bit different depending on which reference you examine.  I would say that the ammo clip has more grey paint than necessary, but given the level of customization or damage any trooper could have it certainly doesn't bother me.  I'm at a point where I'd rather have something that's balls-out incorrect or fabricated than the same old thing for the dozenth time. 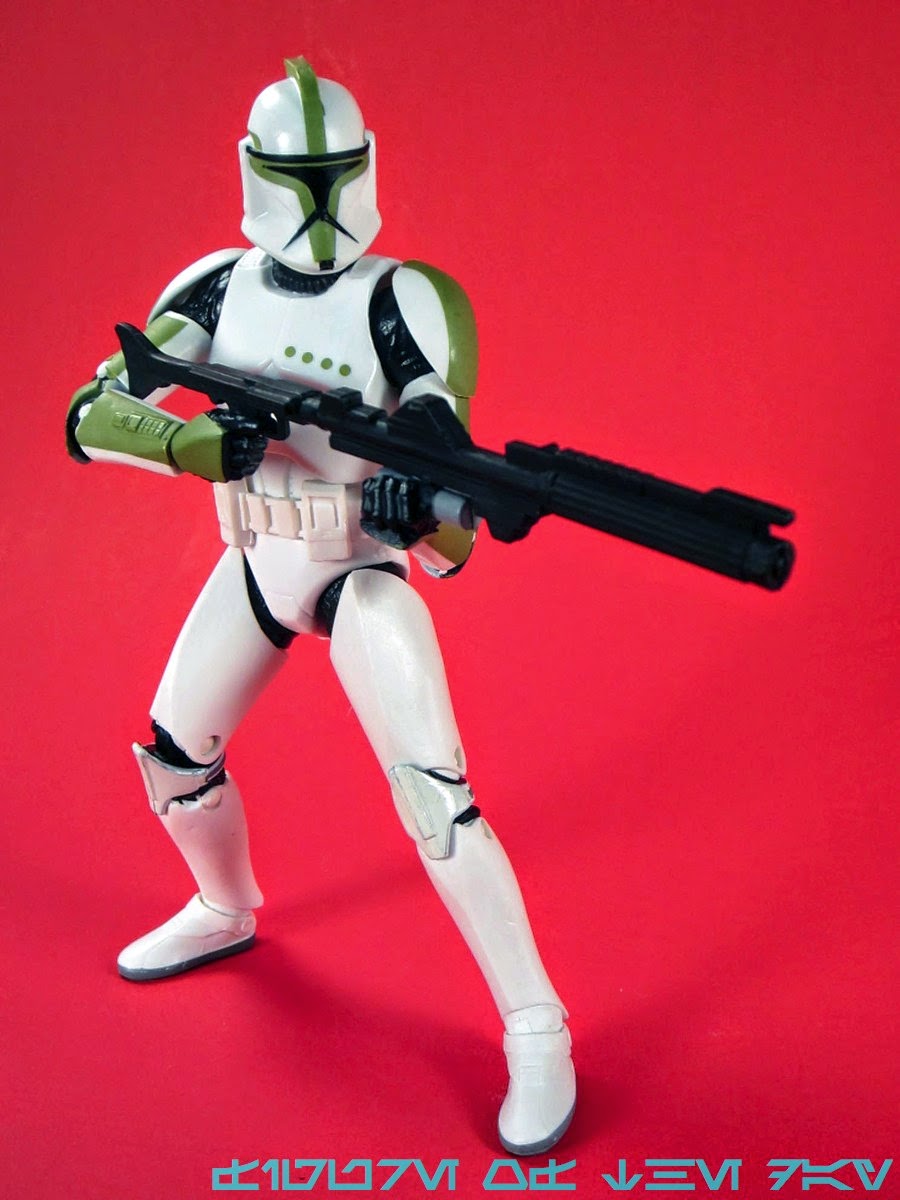 This figure has 24 or so joints, depending on how you feel like counting today.  It stands fairly well, although after a few days gravity can tip it over.  I would suggest using the rifle as an added support (tripod) unless you are using a small-scale doll stand.  This is a perfectly good figure and I'm quite happy that the oft-avoided olive/brown-green deco was the first ranked 6-inch Clone out of Hasbro, mostly because I'm hardly sick of seeing it yet.   Here's hoping we get the other ones, and if they ever do a tripped-out exclusive boxed set with "wrong" color figures based on popular error action figures of the past, a grassy green redeco could be on deck.  I'd buy one!

Collector's Notes: This figure is in major online and brick-and-mortar stores in the USA now.