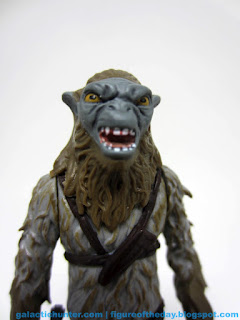 Bio: Hassks are primitive aliens that prowl the shadowy alleys of spaceport towns. The Hassks were ill-prepared for the evils of advanced technology or off-world vices, and many travel with their littermates as roaming thugs, itching to make trouble.  (Taken from the figure's packaging.) 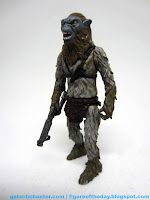 Commentary: The Hassk Thug is one of a few of this species in Maz Kanata's castle, although there's at least one named one - Varmik.   He's a triplet and they all look alike - an instant army builder, if you could find any.  Each of their outfits are a little different, and the actual creatures look a  bit different from the final toy.  Their eyes are way creepier, their teeth sharper.  Their bodies have full male-pattern baldness.  This guy looks a bit cleaner, like an ape werewolf.  The color is pretty good with trying to convey what we saw in the movies, but "thinning full body hair" isn't exactly something I think could easily be done.  As such, it ain't perfeft, but it's not like you've got options - and Funko's isn't disgusting either. 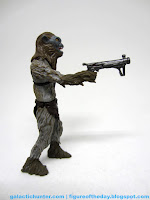 The movie design looks like a recently deceased creature whose hair is falling out and who, I assume, has a touch of vampirism or lycanthropy.   The figure itself is quite hairy, with grey and browns mingling in a way that doesn't quite match what we saw on screen.  It looks more like an aging and greying Wookiee, which I suppose 20 years ago would open the door to a new 3-pack of all 3 brothers with exposed skin and thinning hair as an exclusive.  Today, it wouldn't shock me if this were the only Hassk figure we ever see just because the figures-per-year are generally confined to  window of September to March and then naptime until the next movie, which will no doubt focus on the next movie.

His face look more like an ape to me, with rounder, hairless features and lacking fangs.  The deco is good - I love the wrinkles, the eyes, the individually sculpted teeth, and the pink interior to the mouth.  The factory did a bang-up job making the sculpt look good, but the sculpt doesn't look very good - and it wouldn't entirely surprise me if this was a result of the assets granted to Hasbro to develop the figure.  In many respects, the figure feels a lot like the 1979 Cantina aliens - they were kinda close, kinda wrong, and a lot of fun.   And we can do better.  But we love them anyway. 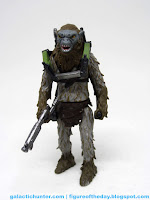 The bonus accessory is a backpack which you can plug guns on to make a backpack with guns.   Why you would want this, I do not know.  I know the reasoning is usually "kids like it," but most of the weird bonus accessories serve more of a purpose.  If a figure has a gun, a second gun isn't going to do much for anybody - but one that shoots?  OK, that's something.  A backpack can be used with other figures, and the green deco looks good.  It's clean.  I just don't need it, and the combined mode leaves me wondering what I should be doing with it as it's not very Star Warsy.  If or when Hasbro reissues this figure, they will no doubt leave this out and you won't miss it. 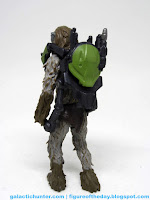 Because there are precious few aliens in this movie line, I'd consider this a required purchase.  The designs of The Force Awakens which made their way to the toy line are a mixed bag, but at least are different enough from previous toy lines that I can say it's different enough to be neat.  If you want to wait around for something more authentic I do not blame you one bit, but I assume you'll be waiting a long time.   For now, I'd say buy the Hassk Thug if you can find it for $10 or less - it's better than the alternative.

The only good reason I see for buy this figure is for create a custom Itchy, chewbacca's father.