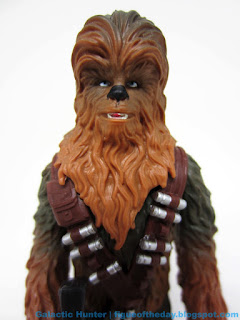 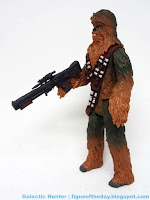 Commentary:  I was pretty pleased with The Last Jedi's take on the character, but since he has the most significant change in appearance, well, ever, it makes since Solo: A Star Wars Story gets its own Chewbacca.   He looked sort of like his original trilogy appearances in Revenge of the Sith, so the decision to change up his hair a bit and give him a new bandolier - and a new weapon - is interesting.  I assume he needs replacements because his are lost or stolen.

He's almost the same as his The Last Jedi release, with similarly posed arms and legs. The fur is tweaked a bit, and the torso and head are new - but they're clearly made form the same basic sculpt.  This is more than a little disappointing, because side-by-side they look strikingly similar.  The new prequel Chewie looks taller thanks to the new head, which is easily one of the best Chewbacca heads at this size.  It's expressive, with a painted mouth interior and blue eyes.  And a black nose too.  Articulation is also slightly improved, as his neck can actually turn well for a change.  A lot of Chewbacca figures have a neck joint, but it's obstructed because if his beard and hair - this one has a real range of motion thanks to some clearance around the bandolier. 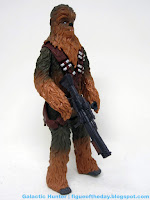 I have a feeling that some of this era of figures could be a real treasure later just because there's so little of it and nobody seems to care.   It's a good figure, but I doubt kids are going to get a  nostalgia pang later just because Chewie barely fits in the new Millennium Falcon.  There are a few places to fit figures, and you really have to get him in there just-so.  He's really big, and awesome, but figure-vehicle compatibility would just barely skirt by - he meets the requirements, but it takes a bit of contortion.  This is more of a knock against the vehicle than the figure - I like the figure a lot, and the different Y-shaped bandolier and new gun is more of what I would have expected we would get in Revenge of the Sith.  I appreciate the changes, because really, give me something different.  This is different.  Get it if you find it - even if it lacks Porgness.