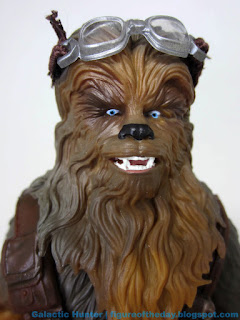 Bio: A mighty Wookiee nearly two centuries old, Chewbcacca has fallen upon hard times during this age of the expanding Empire. (Taken from the figure's packaging.) 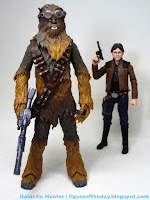 Commentary:  My very first action figure from Star Wars was the big Wookiee, so this new Chewbacca 6-inch action figure had me pretty excited. Despite appearing in Revenge of the Sith, Chewbacca looks more like the Chewie you remember while also changing up his appearance a bit.  It's quite the paradox - and it's also my favorite.  So far we've had three eras of Chewbacca in The Black Series, all of which are fairly similar minus the head, torso, and accessories.  This one is pretty clean.

By dropping the weird light highlights on the arms and black shadows around the eyes, Hasbro not only saves a few bucks but delivers a cleaner fuzzball.  The colors just look like they belong here, with the fur sweeping naturally.  It's not too dark, it's not too light, and he has a happy open-mouth grin as opposed to the fearsome roar of the original trilogy version or the closed-mouth fluffed-out head of The Force Awakens.  All, of course, are equally valid - but I just love this one.  I dig the gnarly y-shaped bandolier with the rounds (or canisters) on them.  I love the goggles, with an elastic band that fits perfectly over his eyes or on his forehead.   It just works.  You pick it up, and it's Chewbacca - the toes and fingers are painted, the eyes and nose are great (usually), and the personality is all there.  This figure can be a quality product - but with a couple of caveats in the notes below.  In short, buy one in person, or don't. 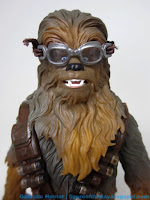 The blaster isn't Chewbacca's trademark bowcaster, and I find that fascinating.  The Revenge of the Sith figure had one, but this one has a new rifle that's big and mean. There's a silver barrel, a nasty scope, and a grip on the bottom that can actually move around to cock it.  (I'm not a gun person, I assume I'm right.)   The hands are quite tight, so it's unlikely he'll look good double-gripping it - but he can, if you want.  It's a cool blaster and one of the better Disney-era weapons to date.   Hasbro did a bang-up job cutting corners and delivering us a resculpt that I was actually happy to buy.

He does share a lot of parts with previous figures, down to the SKU and copyright info on his feet.  (The new info is printed, the old figure's info was molded.)   At least it's somewhere that you won't see it on display, isn't that right Hasbro of the late 2000xs?  I'm seeing him around a bit more these days, and given the lukewarm reaction to Han's movie I doubt he'll go anywhere fast.  If you see it on clearance, buy two.  Otherwise, just get yourself one - it's neato.

Collector's Notes: I got mine from Target.  These are your warnings: he has wonky eyes on some samples.  Also, the grip under the blaster is able to move and may be missing - compare eyes and blasters across multiple figures before making your purchase if at all possible.  A good one is very good - and a bad one just means you will be sad.