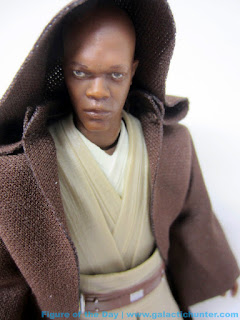 Bio: A grim Jedi Master with an amethyst-bladed lightsaber, Mace Windu was the champion of the Jedi Order, with little tolerance for the failings of the sentate, the arguments of politicians, or the opinions of rebellious Jedi.  (Taken from the figure's packaging.) 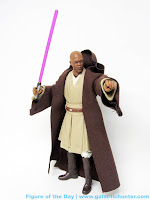 Commentary:  This Mace Windu figure marks a few important milestones from Hasbro.  It's the first Attack of the Clones Jedi - or possibly just another Revenge of the Sith, but let's not go there.  It's the first cloth cloak we've had in the 6-inch side, and unlike the 3 3/4-inch ones, it's actually pretty good. The hood is sewn down in a pretty perfect place, so you can position it so it's on his head and doesn't look entirely stupid.  It's one of Hasbro's best small-scale robes, and the thickness of the cloth is pretty good too.  Nicely done, Hasbro.

The articulation is nothing special  As usual, "amazing" is now normal so it doesn't register as being special.   You get rocker ankles, bend-and-swivel wrists, and the sculpting does a good job if disguising the joints with boots and robes and all that good stuff.  I had a lot of problems getting him to stand just right, so I would get him a good display stand if you can find one.  I think he's going to fall with time.

The lightsaber blade is removable from the hilt - that's good!  The hilt has no way to attach to the belt.  Six years in, that's a big disappointment when we have the robes and a fantastic Samuel L. Jackson printed portrait on the face.  This is a figure you won't want to miss, and I have to wonder if we'll see a "sneak preview" variant with the wrong lightsaber at some point down the road.  I was hoping they'd paint the soles of his boots a different color like some of the small figures, but I guess that era has passed.

Email ThisBlogThis!Share to TwitterShare to FacebookShare to Pinterest
Labels: Attack of the Clones, Jedi Knights, Mace Windu, Revenge of the Sith, The Black Series 6-Inch