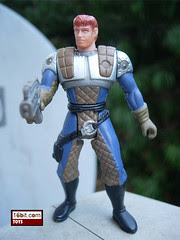 Bio: In all the galaxy there are few who can fly and shoot like Dash Rendar. Many years ago, as a cadet at the Imperial Acadmey, he continually impressed his superiors with the ability to push vessels beyond their usual limits, executing maneuvers his ships were never meant to perform. He held great promise as a future Imperial officer until a freight vessel piloted by his brother malfunctioned and crashed on Coruscant, destroying a private museum that housed many of the Emperor's treasures. Though the mishap was not the pilot's fault, the Emperor banished Rendar's family and had Dash expelled from the academy. Given his bold disregard for regulation and arrogant confidence, it is doubtful that Dash would have fit in well within the ranks of the Empire anyway. He never hesitates to boast of his skills as an expert pilot and gunner. After his dismissal from the academy, he began a career as a thief and gambler, but soon discovered that his exceptional flying skills were a great asset in the smuggling business. (Taken from the figure's cardback. It goes on but we're cutting it there.)

Commentary: The Shadows of the Empire story was an interesting one, particularly its development. At one point it was to take place between the first two films of the original trilogy, and then it was moved-- so now Han Solo was frozen. Enter Dash Rendar, a generic meatless off-the-shelf gluten-free Han Solo substitute. The fairly unmemorable character had a design that seemed very much of the 1990s by way of the 1980s, with lots of padding and huge guns. The giant gun pack wasn't particularly true to any of the licensed story tie-ins, and the character's head for Kenner's figure didn't really look like any of the other versions, either. He often appeared with bare arms, and this action figure was fully enclosed.

The character is so much like Han Solo that Kenner sculpted him in a nearly identical pose to its then-current action figure of the original Corellian smuggler, and Dash also sported the same difficulty standing that Han had. It's pretty amazing when you go back and look at it. Dash has six points of articulation, and none of his parts have been reused to create other figures.

Collector's Notes: To date, Dash Rendar has been released exactly once, but his poor sales kept him on pegs for a while. Xizor sold fare more poorly. He's the one and only, so unless Hasbro announces a new Dash Rendar soon (which is seemingly less likely with the future of comic packs in question), you'd better go after the original. On eBay, he sells for $1-$3. An update of this character is frequently requested by fans, particularly by those that grew up as part of the Nintendo 64 generation. The Shadows of the Empire video game resonated strongly with numerous fans from that era.

Email ThisBlogThis!Share to TwitterShare to FacebookShare to Pinterest
Labels: Rebellion, Shadows of the Empire, SOTE

A new Dash would be nice, but geez, guys, if you're going to revisit Shadows,please, do a Guri, the only interesting character introduced in that book.

We need more Shadows of the Empire comic packs. I would love to see Big Gizz, Jix, Spiker, Luke in black clothes and tan vest, a new Dash, a new Chewie as Snoova, Guri, and a Barabel bounty hunter.

I'm still of the mind that 1990's Cable-esque looking characters are worthless, especially Cable himself.

His ship was also underwhelming.

I thought SOTE was a good novel and comic series. The soundtrack CD was amazing. I agree the character of Dash was paper-thin, especially since we were just introduced to Lando (in the SW timeline, that is.) Still, I thought the whole SOTE project was a bold and very interesting move, and one of the better EU stories, in my opinion.