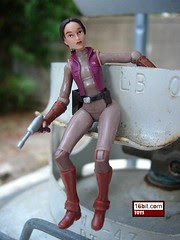 Bio: Padme becomes a hostage aboard the Malevolence, the deadly Separatist ship commanded by General Grievous. The courageous senator escapes her captors and contacts nearby Republic forces. She and C-3PO avoid battle droids to rendezvous with her rescuers, Anakin Skywalker and Obi-Wan Kenobi. (Taken from the figure's cardback. The same outfit was on the Blue Shadow Virus episode too.)

Commentary: It seems after the first Padme Amidala figure Hasbro made for the cartoons, they took a lot of notes from fans. This one doesn't just have some articulation, but she's a full super-articulated animated figure-- except for the ankles. On a thin design like hers, it's quite impressive to see the whole thing come together and remain fairly sturdy, or as sturdy as one can expect for these things.

The first animated Padme from the CG-series seemed much more cartoonish, this figure's head sculpt is slightly more realistic. Not to the extent it might fit in with your movie collection, but pretty close. There's not a ton of special detail here, but there are numerous nice touches Hasbro included which makes her look more female than some other similarly sized figure. For example, she has eyeshadow. There's a little lipstick. Oh yeah, boobs too. She has little problem standing or sitting, and is an unusually thin action figure-- which actually may mean her proportions work better in some vehicles. (Or so was my finding when I trotted out my trusty PDT-8.) There's not a ton of excess color here, but the figure just plain clicks-- this is the best cartoon Padme you can get. So get it.

The rocket-firing accessory grapple thing is too big for the figure. It's well-designed, painted nicely, and fits the look and feel of all the Naboo guns we've seen over the past decade. It's just freaking huge.

Collector's Notes: She's pretty new, but Hasbro's history with female figures in this sub-line suggests that you should buy her on sight and not wait. She likely will go away quickly and shoot up on eBay as soon as she does.