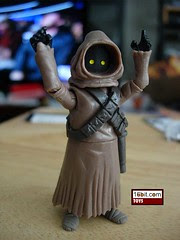 Bio: These Tatooine scavengers hunt for lost or abandoned equipment- machinery, droids, or even starfighters that appear unoccupied. Jawas look almost identical to outsiders, but among each others, they can easily identify differences in lineage, health, and other details. (Taken from the figure's cardback.)

Commentary: 2-packs with at least one Jawa have been a modern line tradition since 1996. This is the first time we've seen cartoony ones, and it's worth noting that they're the most collector-friendly in a while. Today, we look at the taller of the two. The big Jawa has no light-up eye port, a working holster, and tons of articulation. There are ball-jointed elbows and shoulders, normal wrists, quasi-ankles, a waist, and a neck.

The sculpt is true to the animation model, with big bright eyes and brown (but not dingy) robes. He can hold his blaster just fine, although it is a little strange that the bottom of his robes don't touch the floor, and are pleated (creased? I don't know clothing lingo) like what I might expect in a dress. Maybe these are she-Jawas, or maybe they like dresses. I don't know which. But I do know that this figure has a lot of articulation and looks really slick, and it's nice to have as a figure in this animated line that isn't a clone, a robot, or a Jedi. So few aliens are in The Clone Wars toy line that it's a treat. Since you get two figures, it's a good deal too.

Collector's Notes: This 2-pack has been in heavy rotation since its introduction, and no doubt will continue to sell for a while. Still, get while the getting is good, as it's a great set. Here's hoping Hasbro has an excuse to do a Tusken Raider some day soon!

I love this set!

There have been a lot of nice releases for Clone Wars, but these guys are right up there -- nice simple deco and just a great job.

I wasn't planning on getting much animated product, but I had to get this one. Jawas are the best "cute" race in the saga, mysterious scavengers who cruise around in giant crawlers. This version reminds me of Orko from Masters of the Universe.

Oh, and the small Jawa has swivel ankles, the big one picture has no leg articulation at all.

If they could've some how made them so they could sit...probably not asthetically workable without soft goods.