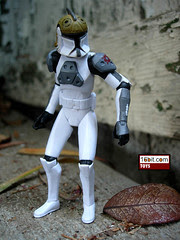 Bio: The AT-TE Gunner aims his blasters at attacking battle droids and opens fire with calm deliberation and pinpoint accuracy. (Taken from the figure's packaging.)

Commentary: Hasbro realizes that fans love Clone Troopers, and this AT-TE Gunner was one "new" figure in a set of repaints. With a new head, torso, and shoulders, the figure stands apart from other clones released in his day in that he actually has armor on top of his armor. It's pretty cool, but one of the neater features that this revised Clone sports is the ability to hold his arms even closer to his body. This may not sound like much, and truth be told it isn't, but it's really neat to see Hasbro redesign a figure in such a way that they may have unintentionally improved its range of movement.

The gunner sports the same basic articulation structure as seen on every animated Clone Trooper from this line, and is decorated to match his squad mates. A newer, individually carded gunner suggests that Hasbro got it wrong with this one, but both look unique and are worth picking up for army builders. Just because the vehicles can fit so many figures, I'd suggest getting this set just to fill seats. Although if you're picky about all your clones matching and you prefer the 2009-style helmets, well, skip this one.

Collector's Notes: A pretty great set, the figure had a unique helmet sculpt which was never used again. Future similar figures had a retooled helmet mold with a different "chin" and other modifications. Similar clones using the new sculpt have been released on an individual card and with the Turbo Tank.