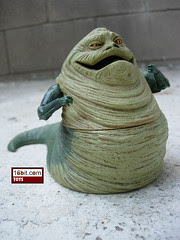 Commentary: There's a fine line between "figure" and "creature" or "vehicle," but since I tend to draw the line mostly at characters, Jabba the Hutt is a really cool figure. While lacking some important Jabba details, he is clearly the best-ever Jabba the Hutt Hasbro has engineered. My main gripe about this and all modern-era Jabba the Hutt figures is that they left off a key subtle detail that the original Kenner sculptors got right back in 1983, and that's Jabba's arm tattoo. There's a very specific design that the Kenner toy elves sculpted right into his arm, and Hasbro/Kenner missed these in their 1997, 1999, 2003, and now 2009 releases. It's rare that a company gets it right the first time and then messes it up, but well, there you go. Oops.

This release of Jabba is awesome if you can get past that one quibble in that Hasbro has finally put the attention needed into his most distinctive features-- his face, and his hands. Really, there's not much this giant sack of filth can do beyond talk, eat, glower, and gesture. This figure can basically do those things due to the smart choice to include a geared mechanism in the jaw that connects to his arms. This makes posing the figure a little tricky, but to see Jabba's mouth open and close so you can make him "talk" is tons of fun. I only wish they had an empty belly so he could eat stuff, too. It's a wonderful release and a smart design, although when Hasbro does this sort of rubbery plastic I do fear for its long-term survival and disintegration in harsh environs.

His arms have been carefully crafted as well, sporting ball-jointed shoulders and elbows in addition to swivel wrists. For a figure that usually only gets a shoulder joint, it's quite impressive-- although his hands do feel very tiny compared to previous releases. Such is life when you're dealing with stylized designs such as this! Either way, it's a lot of fun and well worth picking up.

Collector's Notes: A slow seller as the Battle Packs go, this set will likely be in demand as soon as Hasbro gets out more animated aliens and bounty hunters. Until then, it sticks out a little oddly in a series populated mostly by robots and white-armored troopers. In short, as of today, he's pretty much all alone when he should be the centerpiece of a toy box. Where are his henchmen? Or at least some thugs?

Hey Adam, was delighted to discover your blogs, big fan of your reviews, back in '99.

Another good question: Where is Bib Fortuna? He was at Jabba's side at the Boonta Eve race in TPM, but he's nowhere to be seen in the TCW movie.