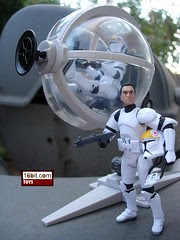 Bio: Clone Troopers arrive on Geonosis in Republic Gunships to support the Jedi, who are battling Geonosian warriors and battle droids. Troopers in armored spheres operate the bubble-turret cannons that extend with laser fire in this opening salvo of the Clone Wars. (Taken from the figure's cardback.)

Commentary: For whatever reason, Hasbro released a Clone Pilot with a turret in 2002 and then never reissued either ever again. Why? Is this out of spite? With five (soon to be six) Republic Gunships on the market, what's the reason for starving the market of these much-needed accessories? Finally in 2009, Hasbro released a giant turret with a pair of pilots. And odd combination, but it's still a pretty nice set.

The Clone Pilot is a retooled figure. The body and limbs are from the 2003 Super Articulated Clone Wars Clone Trooper, which has since been repackaged a kajillion times. The figure's neck was retooled with a Jango head, and now a removable helmet is present for your... helmet removing needs. With 14 points of articulation, this figure is based on the design which set the gold standard for movement on these action figures, so you're getting something good. Unlike most other Clone Pilots, the armor is totally clean. In short, it's the best-possible Attack of the Clones pilot you can buy on the market today. Both figures in this set are essentially identical, although one has its legs stretched out a little bit. Since the deco is the same, I consider both to be the same figure.

The one huge drawback with this set is its cost. In 2002, you could get a smaller turret and a pilot for $4.99. Here, two figures and a turret are $23.99, give or take a buck. To outfit your Gunship will set you back about $50, which is pretty unreasonable. Were Hasbro a little more crafty with the packaging, they could surely fit two into a single Battle Pack box, or perhaps one and one figure in the "Mini Rig" assortment. As it stands, the set is a pretty rotten value if you're looking to outfit a fleet. The actual Republic Gunship costs $50, and has sold for as little as $30. $25 for half the weapons needed to upgrade it is nothing short of obscene.

Collector's Notes: This set is scheduled to ship for a while longer and seems really popular-- since you need 2 turrets to outfit a single gunship, odds are this will be a good seller for as long as Hasbro produces it.

Hasbro claimed that they wanted to put two, um "spheres" in the pack, but couldn't get the costing to work out. Maybe in future, now that the tool is ostensibly paid for, we'll see a reissue somewhere with two turrets and one pilot. Or, it would make a great exclusive to have a gunship packed *with* the turrets.

I dont think that they will ever put the balls and the gunships in the same box. I t would make whatever exclusive it would be too expensive.

They don't seem to have a problem with making exclusives too expensive.

Hasbro's excuses may be valid, but they aren't gonna convince people that less is worth more.