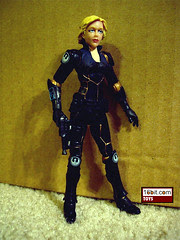 Bio: Luke receives a message from his old friend Janek Sunber, a lieutenant in the Imperial Army, saying he wants to join the Rebellion. Everyone thinks it's a trap except Luke. The Jedi goes on an unauthorized mission to find Sunber and is joined by Deena Shan, who is looking for adventure, and a chance to prove her worth. (Taken from the figure's cardback.)

Commentary: There aren't a ton of comic book characters getting original sculpts, but it seems Hasbro really likes Deena Shan from the Star Wars: Rebellion and Star Wars: Empire comic book series. Why? I don't know. But here she is, in some skin-tight suit. While photographing the figure, she fell over, and I ended up noticing that Hasbro went out of their way to sculpt a really well-defined butt for her. Like, wow. You will be impressed. Luke, on the other hand, has zero definition. If you're going to spend some time making a nice ass, I think Hasbro's designers put their eggs in the right basket, so to speak.

Deena is essentially super-articulated and has a holster for her blaster. She can sit or stand, and the black suit with white, copper, and blue markings looks like it came out of the comic. Her hair and makeup were exaggerated slightly, which is probably better than understating it-- the last thing you want is a blonde man-boy with boobs. (Or maybe you do want that, who am I to judge?) The resulting figure is pretty good, and as she comes in a set with two newly sculpted heroes, it's not a bad buy. If you can find it, that is.

Collector's Notes: This set is newish. It just got repackaged and you shouldn't have too much trouble getting one.

It seems lately the most interesting new figures -- and this would be one of them -- come out in the Comic 2-packs, which are incredibly hard to find (I managed to snag a Luke/Lumiya at retail and was psyched). Deena's a great figure and she fits right in on the 'Rebellion' shelf; too bad she, like most of the other terrific comic pack figs, is so tough to find.

I agree with Ben Carthage. Except for the tiresome retreads of Han, Vader, R2, Tarkin and so on, the Comic Packs feature the most amazing Star Wars figures ... even for a movies/TV-only fan such as I. Such incredible details and colors - and even lots of cloth-goods cloaks 'n such - make the Comic Packs a must-buy. They're irresistible!

"the last thing you want is a blonde man-boy with boobs."

You get one packed alongside Deena Shan anyway.


The outfit is soooo superhero comics...doesn't work for me. Plus she looks like a burnt out barfly. Like the second head sculpt Deena in Imperial disguise better.

Wow, strange to hear this Comic Pack was hard to find for you guys, there are still TONS in Maryland... I like all the Marvel packs, but I agree they re-issue them WAAAAY too much. And and outfits Luke and Deena wore in this series were awful. Why would SPIES wear their organizational logos on their clothing? And where did the Rebels get the money to buy the Bat-suits? And when did Luke get all the spy training? Everytime I look at those figures or the comics, I ask those questions to myself. (Not out loud, honest!) No offense, friends, really. I just didn't like the Rebellion series. At all. But can I be honest? Burnt-out barfly look? Kinda hot... HAHA!