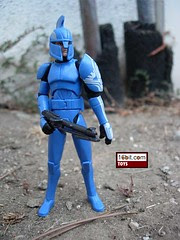 Bio: Senate commando Captain Argyus assists in the transportation of captured Separatist leader Nute Gunray. A member of the Senate Guard, Argyus fights the battle droids that have attacked the ship in an effort to free Gunray. But Argyus has a secret agenda that will jeopardize the successful completion of this important mission. (Taken from the figure's cardback.)

Commentary: At first glance it appears that Captain Argyus, the first (and so far only) Senate Guard from the cartoon line, is just a clever reuse of the Clone Trooper body, with some minor changes. Yes, even the cool wrists are here, allowing extra aiming and pointing possibilitites.

Hasbro caught some features and fixed them, like the elbow armor. You'll notice the excess armor is now connected to the forearm piece and not the bicep piece. The shoulder on the left has been significantly retooled with the larger, theoretically blaster-proof pauldrony thing. Also, there's a new head and helmet. This pretty much matches the show, where they reuse some digital models to save on costs. (There are some pretty fascinating ones, listen to the movie's DVD commentary to see some.)

The character looks a lot like the TV appearance, except for the hair-- which would not fit under the helmet, so Hasbro made a concession here. Most of the detail is translated fairly well to plastic, although the helmet itself is a little flimsy and prone to becoming misshapen if you aren't careful with it. As such, Hasbro may have been better served overall with swappable heads, like the 2008 Obi-Wan Kenobi (The Clone Wars) release. That way you can keep the big giant hair, and the helmet should be less flimsy. (Not that it's flimsy, of course, but it certainly is overly flexible.)

Collector's Notes: A one-case wonder so far, we eagerly await word of revision cases to know if this figure will make additional appearances at retail. He appears on and off at press time.