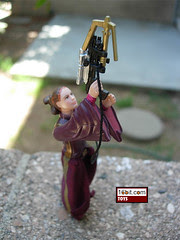 Bio: Cornered in the Theed palace by battle droids, Queen Amidala and her entourage escape through a palace window. Using ascension guns, the heroes are pulled up to the throne room level to challenge the Viceroys for control of the palace. (Taken from the figure's packaging.)

Commentary: In the early days of the prequels, Hasbro wasn't shy about cranking out numerous Queen Amidala figures. It has since slowed down a bit, but in the first year there were about 4 figures based on Natalie Portman's character, two of which were basically the same. This figure wears the same costume as one released in 1999, but now it has a cloth dress piece ("soft goods"), a neck with an added joint to allow her to look up as she aims her gun, and a redesigned body to better work as an action-packed wall climber. The purple and gold outfit has all the detail you might expect, and the head sculpt is pretty good for its day. Sure, Hasbro could do better, but they haven't revisited any of the outfits from Episode I that have already been done as of this figure, and it seems unlikely that they ever will. As one of very few Natalie Portman figures with the ability to sit, she's probably worth picking up. Particularly if you have a Flash Speeder vehicle in need of butts to put in the seats.

Collector's Notes: This figure was surprisingly tough to get in 2000, and hasn't been in circulation since. She continues to have a high asking price, but nobody seems to be paying for it.

Would love to see a 'modern', articulated version of Padme in this outfit, which I still think was one of her neatest suits. Would be far more interesting than another 'candle' figure.

I agree, a new version would be nice, but even a rerelease of this one would probably be sufficient. It IS a cool outfit to start with, and with the fabric skirt portion, she can do more than most Padmes with MORE articulation! As Adam rightly points out, she can SIT in a VEHICLE! And give her a spring-loaded gun for the kids, right? She also looks good shooting straight forward, with both hands in a proper modified Weaver stance!