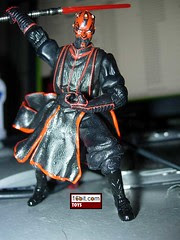 Bio: The chosen apprentice of the Sith Lord Darth Sidious, Darth Maul has undergone years of demanding and sometimes brutal training to become an incredible warrior for the ancient order of the Sith. After expertly wielding his lightsaber to prove his skill, he bows respectfully before his master. (Taken from the figure's cardback.)

Commentary: Why is it that Star Wars' most popular characters have the fewest costume changes? Hasbro must have been banging their heads against the wall before realizing they can mine the various behind-the-scenes books for new costumes for the likes of Darth Maul here. This costume was based on one of many, many illustrations generated of the Episode I Sith Lord. Trading in his traditional all-black robes, these new ones have red highlights. A new design gives the costume a leathery look, complete with gloves that seem similar to those of Darth Vader in the original film. It's nice to see Hasbro wasn't content just to make another black outfit, there are numerous alterations to the coat design.

This figure is particularly interesting in its design-- it's unlike anything else Hasbro has created. Rather than include the now-common ball joints or even the old hinges for the knees, Maul's legs are made of three separate swivel joints. The boot is one piece, the upper leg is another, with a third "knee" piece swiveling to allow for various standing and kneeling poses. Not matter what you do his legs are going to look somewhat bent, so you're pretty much guaranteed to get some sort of action pose out of this guy. The rotating arms are controlled by two dials on the figure's back, giving this action figure a puppet-like play feature. Generally, we get "squeeze the legs" or "push the button," so this is a feature unique to this figure.

The final feature on this figure is the magnetic wrist. Like many 2002 Jedi and Force-users, he has a magnet in the palm of his hand which can "grab" his metal lightsaber to varying degrees of success. On this figure, it basically works. There's a lot more going on with this Maul than most others, and while this isn't the definitive Sith for your collection it is so totally different than other figures you may have bought that you should totally pick it up to futz with it. I keep a spare on my desk at work.

Collector's Notes: This figure was available in blue Saga packaging in Fall of 2002. In very late 2006, it was introduced in black-and-silver The Saga Collection packaging as one of several repackaged and repainted figures. If you can only get one of the two, know that they're virtually identical but that the 2006 release also includes a stand. So all things being equal, the packaging and contents of the 2006 release are superior. The figures are virtually identical.