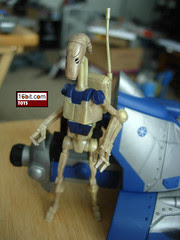 Bio: Armored Scout Tanks (ASTs) are light reconnaissance vehicles driven by pilot droids. Specially programmed battle droids operate the vehicles and fire upon the enemy with twin laser cannons. These repulsorcrafts are deployed in small units for hit-and-run missions or used to support larger military campaigns during the Clone Wars. (Taken from the figure's packaging.)

Commentary: Included with the Armored Scout Tank, this Battle Droid features "pilot" coloring, just like in the movies. Its blue decoration sets it apart from other animated droids, despite having the same basic sculpt. You still get a good range of movement on this guy despite only having 8 points of articulation-- Hasbro really made them all count. He can sit or stand, plus pilot his vehicle as was the intent. If only he had a blaster!

The vehicle itself is also a repaint of an older toy originally sold in 2000. This time around, it's painted blue and silver, plus it costs $6-$7 more. At $17, it's priced very close to the full-size Federation Tank at some stores, so you may want to look twice before making a choice unless you're after this specific figure. While there's nothing wrong with this figure, it doesn't do or offer anything unique over its carded counterparts save for the blue shoulders, which, not surprisingly, is enough for me to want one.

Collector's Notes: Currently in rotation, odds are you'll be able to get these without too much trouble until early next year. And then who knows.