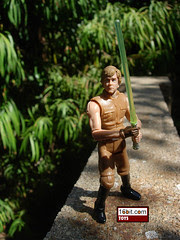 Commentary: Based on a storyline in the 90s of Marvel Comics, this super-articulated Luke Skywalker draws heavily from both new and existing figures. The legs are the same Jedi Luke legs Hasbro has been using since 2007, but the rest of it is new, or new enough. The upper torso is very similar to the Vintage Bespin figure, with new arms and a new lower torso. The head is also new, or at least modified a bit from previous releases. The figure has no problems standing or sitting, plus can hold weapons in both hands as long as the clear rubber bands in the package didn't do too much damage in transit. (They often do. And no, there's no easy way to tell.) Unlike previous comic 2-packs, this set seems like it may be colored realistically-- it isn't bright, crazy colors from the comic art, or if it is, Hasbro toned it down just enough to not look crazy. For this, I am glad.

Were I a kid, this would be my default Luke figure. Unlike other post-Return of the Jedi Luke Skywalker toys, he's actually capable of sitting, and it looks more like it stepped out of the 1980s. In short, it's a solid design and a surprisingly good toy that's ready to pilot any of your many vehicles. While I would have bought the set for Lumiya simply out of the desire to own a figure of the character, this Luke figure is a genuinely great one, perhaps one of Hasbro's best, and is absolutely worth picking up despite it not being in any of the movies. Because, c'mon-- two lightsabers!

Collector's Notes: This set is new, although it seems to be shipping in small numbers and/or is quite popular. It's expected to ship a while longer, as long as the comic pack line does well, but there's less and less expectation that it will continue in the future.

na, the best comic pack ever for me is the clone commando and the super battle droid one 2 army builders on one pack come on cant beat that.