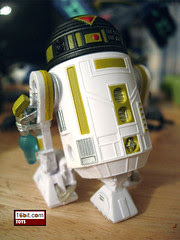 Bio: R7-Z0 was an R7-series astromech droid which was primarily colored white with a black dome and yellow-green access panels. (Stolen from Wookieepedia.)

Commentary: There's little to no backstory for the droid R7-Z0, but at least he looks pretty cool. The first-ever R7 droid toy came out in 2008, and the design was indeed refreshing. the unique dome has ridges and ribs on it, plus a big and almost triangular eye. The body was redesigned with a whole suite of new panels, unlike the shared body type used in nearly every other astromech droid to date. With greenish yellow markings and a big red eye, it definitely stands out on a shelf, but isn't nearly as ornate as the repaint of this figure, R7-T1.

The figure, after assembly, has all the articulation you'd expect on a droid of this scale. The dome twists, the legs and ankles move, and the third leg can come off if it's getting in the way. Also, each leg has a plug-in rocket, much like R2-D2 in the prequels. It's a pretty good design overall, and it's great to see Hasbro finally make these little guys. It seems unlikely we'll see repaints of the R7 build-a-droid mold in the near future, but hey, at least these are still out there for those who are interested. It's also worth noting that, again as far as I can tell, this droid has not made any appearances outside a guide book as a line art illustration.

Collector's Notes: This figure's parts were available in July of 2008 with select figures like Ak-Rev, Bane Malar, Darth Vader, and Yarna D'al' Gargan, some of which may still be easily available at a store near you. Probably not Darth Vader, though.

This is a nifty astro droid, but as Adam points out, it doesn't really "belong" anywhere, in any scene or with any figures in particular. It's pictured in the New Essential Guide to Droids, which is cool. But otherwise, Hasbro has definately done better BADs. According to Wookieepedia, the other R7 from this series,
R7-T1 (light blue/tan,) was mentioned in the Black Fleet Crisis series of novels as Luke's E-Wing fighter astromech. So, whene Hasbro decides to make an E-Wing...

"it's great to see Hasbro finally make these little guys"

Never heard of them, and if someone showed them to me I wouldn't care if they were ever made.

Am I alone in not liking that the BAD astromech's leg joint area sticks out too much? I realize this was probably for fun part swapping with non-astro droids, but really it and the lower body holes reduce appearance accuracy.