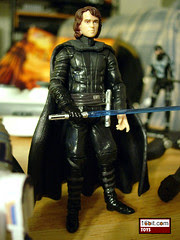 Bio: In this concept art by Sang Jun Lee, Anakin wears the "dark Jedi" apparel that outwardly reflects his inner conversion to the dark side of the Force. The outfit was designed to echo the clothing worn by his son Luke during the climactic battle with Emperor Palpatine. (Taken from the figure's cardback.)

Commentary: One of the unfortunate side effects of capes and certain garments is that on some figures like this Anakin Skywalker, it's almost a wasted effort. While it's fantastic that the engineers at Hasbro made this figure super-articulated with the 14 joints you've come to expect, the figure is rendered incapable of sitting due to his cape. And his cape caused the figure to have a slightly longer neck, which makes him look a smidgen goofy without it. In short, the cape sculpt is acting as his shoulders-- so it's good to leave it on. His lightsaber hilt plugs into his belt and the sculpting on the figure is totally great.

With lots of black sculpted leather, this figure doesn't really fit in with the rest of the prequel line. Heck, with his fairly accurate likeness, it's not necessarily a good fit with the other concept figures, but it's still pretty swell. If anything, it's probably worth getting to display along with your Concept Grievous, which is one of Hasbro's greatest modern-era Star Wars action figures. It looks like they'd have a good fight.

Collector's Notes: Early Hasbro photography shows this figure with a red lightsaber. None were produced with a red lightsaber as Lucasfilm dictated the change. A one-timer, this Anakin may go down as being desirable because a) it's part of an insanely popular subseries and b) it's part of a hard-to-find wave. Good luck! And does anyone else thing it's weird that this figure shipped as part of an Attack of the Clones wave? Oh, one last thing-- this Anakin kicked off a series of concept-inspired figures, which would also include IG-88, a second Snowtrooper, Ki-Adi-Mundi, and, arguably, a new Plo Koon.

This figure didn't need ball-jointed elbows when swivels would do.

I mean, it's based on artwork. It was never see moving, so it shouldn't have any articulation at all.

I love all these concept figures. This one is probably the most tame, in that it's so simple. The only problem I see in it are the knees. Those are the funkiest knees on a SW figure ever! Good thing all he does is stand there and look glum!

"And does anyone else thing it's weird that this figure shipped as part of an Attack of the Clones wave?"

It's no weirder than Concept IG-88 shipping as part of the ROTS wave.

I thought this was a great figure simply because, while maybe not as 'different' as other concept art, this really is a melding of Anakin and Darth Vader, which I suspect was what Hasbro was aiming for. I would have preferred the red saber myself; this could have been a 'what-if' figure of Anakin had he not dueled Obi-Wan and just ran around killing children and other Jedi. But even as is, a neat addition to the line.