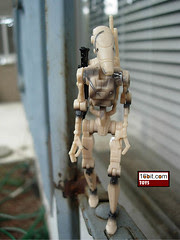 Commentary: Here's another one! While not as popular as their Clone counterparts, the Battle Droids comprise a huge sub-collection in Star Wars with numerous molds, deco variants, and nifty action features. Plus as an added bonus, they tend to fold up nicely, or are thin and many can be kept in a small place. Since 1999, the very first couple of molds used to make these figures tended to be the best, with a great level of detail and a ton of articulation. The newest Target exclusive droids have more joints, but this early figure still stands up nicely. Literally-- its limbs are thicker and stronger than later droids, and if you have him standing on a shelf he's much less likely to fall over due to gravity.

With 9 points of articulation, these were some of the most amazing figures you could get in 1999. Elbows, knees, and the ability to sit weren't things you tended to see all on one figure, plus they could more or less collapse into little balls like in the movie. (Just not as well as the newer ones.) If you need a figure for a vehicle pilot, or to populate a diorama, these are some of the best you can hope to get. Due to the fact that all four variants shipped one to a case when other figures with no variants shipped four to a box, these guys are significantly less common than the likes of Darth Maul and their ilk. They're still pretty cheap, not totally worthless, but probably a better value than buying whatever droids are currently at retail were you to pick them up on eBay.

Collector's Notes: This is one of four color variants of this mold, and the same paint job was applied to Saga Legends Battle Droids starting in 2007. The articulation is, of course, quite different.