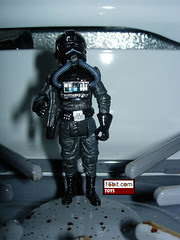 Bio: The elite TIE Interceptor starfighter slices through space with its dagger-like wings and ultrasleek design. Designed for speed and firepower, this Imperial fighter has four additional laser cannons mounted on its wings that the pilots use with devastating accuracy. As a space superiority fighter, the TIE Interceptor challenged the Rebel Alliance and was used extensively at the Battle of Endor. (Taken from the figure's cardback.)

Commentary: Believe it or not, it's 2009 and there's still no such thing as a TIE Interceptor Pilot (or TIE Fighter Pilot) that's super-articulated. This one comes very close, but there are no ankle joints-- not that this is a deal breaker, of course, given that the figure exists mostly to occupy a chair inside a fully-enclosed vehicle. It's not like he'll be doing a lot of running around. Hasbro opted to include a holster on this figure, but it's a pretty unfortunate addition. Not only is it glued over the figure's molded belt, but it's generally aligned poorly, hanging off to the side. Also, the blaster's unusual shape gets in the way of the figure's arm, and is actually better left off to the side depending on how you store or display this one.

On the bright side, he looks good. The helmet is sculpted well, the head is the typical Clone Trooper design (which may not be entirely accurate in the context of the films), but at least he has a waist joint. The figure is a repaint of a pilot which was released just weeks before this one, and it had "elite" markings on his helmet as seen in very few behind-the-scenes photos and as practically not seen in the movies. If you want the best-yet plain TIE Fighter Pilot, the Toys "R" Us TIE Interceptor is the only place to get it right now. Unless Hasbro reissues it on a regular package, which seems like something to expect in the next two years.

Collector's Notes: This was the first way to get this particular TIE Pilot without the "elite" markings on his helmet. A similar (if not identical) figure just hit with a regular TIE Fighter as a Target exclusive. For the purposes of this column, they're identical.

Email ThisBlogThis!Share to TwitterShare to FacebookShare to Pinterest
Labels: Empire, Exclusive, Imperial Pilots, Return of the Jedi, Shadows of the Empire, Star Wars, The Empire Strikes Back, TLC