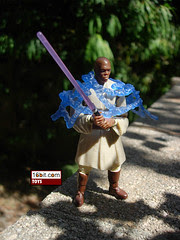 Bio: Mace Windu is a courageous fighter and respected member of the Jedi Council. In a desperate attempt to save the galaxy, Mace leads a daring confrontation against Supreme Chancellor Palpatine. (Taken from the figure's cardback.)

Commentary: For whatever reason, Hasbro has struggled a little with Mace Windu. Sure, the 1998 mail-in figure looked great, but most of them since have been all over the place. This particular one had great arm articulation-- the best-ever for the character when released-- plus a great costume sculpt, which, of course, Hasbro had plenty of chances to nail down. Unfortunately, there seems to be a bit of difficulty making it look like Samuel L. Jackson's head, outside of being black and bald. This figure looks a little bit like him, but due to his exaggerated shoulders and very thick neck, doesn't really do the actor justice. The super-articulated version from 2007 is different, but doesn't exactly fare significantly better overall.

This figure's best selling point is its action feature. You can put some Sith Lightning on him, and squeeze his legs so he swings his arms and can shake it off. It's pretty neat, not necessarily useful in displays, but a fun little way to mess with the figure when you're bored and have one on your desk. Despite having a plastic "skirt" blocking his legs, the plastic is generally quite flexible, and can sit in some vehicles. Overall, this figure works well as a toy, so if you enjoy action features and unique accessories, it's worth picking up if you can get one for cheap. And most likely, you can.

Collector's Notes: This figure sold in 2005 and was repackaged in 2006. The same figure was reused for the Mace Windu's Attack Battalion Battle Pack for Target, but it swapped out the lightning for a cloth cloak.

Adam, I've never understood the assertion that Hasbro has difficulty making Mace Windu's head look like Samuel L. Jackson. He looks just fine to me (not including that Saga 2002 monstrosity).

Maybe you could turn your attention to Mattel and complain that its Zac Efron and Twilight Edward doll heads look nothing like the actors (the same for Tonner). Plenty of ground to mine in these areas.

I have the Battle Pack Version, the action feature is amusing, though it limits posing.

I think it looks like Jackson, but they have a habit of giving Mace Windu's odd facial expressions (remember that goofy 12" figure?), which is odd since he was stone-faced the prequel trilogy except for when he lost his hand and Palp's zapped him.