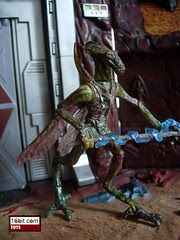 Image: Adam's Geoniosis Arena playset. I used this one to shoot a bunch of figures. I totally suggest you go buy one.

Bio: Geonosian warriors are the inhabitants of the rocky planet Geonosis. These warriors aid Count Dooku in his effort to incite a civil war. (Taken from the figure's package.)

Commentary: Because of today's movie development process, toys are started long before the movie completes post-production. As such, digital characters like the Geonosian Warrior are not fully realized before Hasbro gets the specs to make toys. Rather than waiting to see the final edition in the movie, they fudge it based on early models and concept art, and sometimes they do such an awesome job you'd never know. Other times, well, it's a little obvious, and that happened a couple of times with Attack of the Clones. Long gone are the days of waiting it out, this release took its cues from early models which were developed before the creature's clothing. So while it's a great interpretation of the alien species, it's totally nude and ready to party down. As such, depending on your feelings as a collector, this is arguably more of a curiosity than one of Hasbro's great releases. However, in a crowd, it's pretty tough to tell who is or isn't wearing pants, so this figure is probably just fine for your diorama needs. Also, it's cheap.

The figure has an awkward pose and very limited articulation with joints at the neck, shoulders, and hips. He can stand, but balance is something of an issue because his legs are going every which way. He also doesn't seem to like to hold on to his staff too much, so he can be a bit of a trial in some places. But since Anakin Skywalker is going to hack these up real good anyway, well, it's no bother. (Speaking of which, there is a Geonosian out there specifically designed to be sliced up by Anakin. But this isn't it.)

It's a very below-average figure by modern standards but it looks pretty neat and as troopers go, is a fun little release simply because it is different from what appeared on film. Hasbro made an updated warrior in the new Target Geonosis sets, so you may want to get that too-- but I'd make sure you have one or two of these in your stash, just for fun.

Collector's Notes: This figure was a one-timer and has been redone in a few forms. This is probably one of the least interesting versions of the character, but he's totally naked, so there's that.

Email ThisBlogThis!Share to TwitterShare to FacebookShare to Pinterest
Labels: Attack of the Clones, Geonosian, Saga, Separatists

Hasbro has done nude figures - excellent. Perhaps we're not too many years away from a Slave Leia with removeable bikini...

Well, if this species of hive-dwellers are anything like bees, all of these worker/warriors are female, anyway.