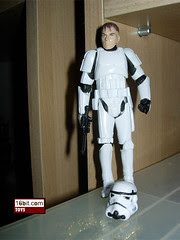 Bio: Anson Trask was a Human male stormtrooper in the Galactic Empire during the Second Imperial Civil War. Following in his father's footsteps, he joined the 407th Stormtrooper Division where he was assigned to Joker Squad. Shortly after completing his training, he fought in the Battle of Borosk against forces loyal to former Galactic Emperor Roan Fel. After the battle, Darth Maleval executed Joker Squad's commanding officer, Lieutenant Gil Cassel, and Trask killed the Sith Lord to protect his comrades. Trask and Sergeant Ran Harkas were later sent to Ossus to find a group of Jedi hiding on the planet. (Stolen from Wookieepedia.)

Image: In a toy room.

Commentary: One of the first members of Joker Squad introduced-- and one of few survivors-- was Anson Trask, a fresh-off-the-space-boat young man with a goofy haircut. Since the comic depiction of Legacy-era Stormtrooper armor varies from issue to issue, as seems to be the style 150 years after Palpatine died. The figure is based on the Vintage Original Trilogy Collection sculpt with the revised neck post. So yeah, if you have one of the Clone-headed troopers or Luke or Han Stormtroopers, this is basically that with a new head and a white blaster holster. Basically, it's another Stormtrooper for your ranks, which is as good a reason to buy this as any. The head sculpt and hairdo match the comics nicely, but he's seemingly lacking in neck.

Collector's Notes: This figure comes with 5 others in the Joker Squad set, which is currently exclusive to Entertainment Earth. The story of the squad appears in Legacy #4 or the second volume of the collected graphic novel.