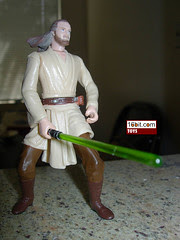 Bio: In their attempt to liberate the Naboo people, Qui-Gon Jinn and Obi-Wan Kenobi face their deadliest foe...Darth Maul. While the desperate final battle against the Trade Federation rages on outside, Darth Maul corners the two Jedi inside the Theed hangar. Armed with a double bladed lightsaber, Maul leads Qui-Gon and Obi-Wan into a snare of deadly surprises-collapsing catwalks, secret traps and battle droid ambushes! Maneuvering through the hangar, Qui-Gon Jinn takes out a band of battle droids with his lightsaber and his mighty power kicks before coming face to face with Darth Maul! (Taken from the figure's packaging.)

Commentary: Without the playset, this Qui-Gon Jinn isn't particularly exciting. It has loose limbs so you can plug him into his playset, which has a big lightsaber-shaped joystick that allows you to control the figure and have him "fight" things around the hangar. It's a really ornate way to make a deluxe figure with an action feature, using a playset as a disguise for a fairly clever way to bring a single figure to life. Because of this, the figure has very limited articulation. Also, the sculpt is a little less crisp than other figures, and the deco isn't as good as other Qui-Gon Jinn toys. It's a perfectly fine figure, but this is one you get to finish a collection rather than to be your one-and-only Liam Neeson Jedi. The figure is basically OK, but the playset itself is the reason to pick up this figure. It's a nice way to display some of your toys.

Collector's Notes: The figure didn't become a hot commodity, mostly because the entire era was kind of a turkey that way. The packaged playset with both figures can be easily had for less than original retail on eBay. In some cases, for less than the price of an individual figure.

I remember getting the set on clearance. The action feature was goofily amusing. The set included a battle droid with no articulation, just for cutting in two. Maybe the should've a Death Star version with action Vader and a non articulated Obi-Wan that when struck, disappears under the floor, leaving only a cloak.