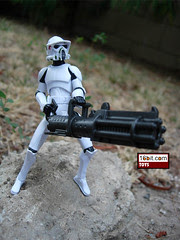 Bio: These Advanced Reconaissance Fighters often operate All-Terrain Recon Transport (AT-RT) walkers on scouting or combat operations. Riding atop these armed vehicles, ARF troopers can swiftly sweep through an area and cut down battle droids in their path. (Taken from the figure's packaging.)

Commentary: It wouldn't shock anyone if the ARF Trooper were just another Clone Trooper with a new head, but Hasbro actually redesigned the hips too. The figure has ball-jointed legs, which is unusual in the animated line. This allows the figure to assume more action poses, which is good for being posed with his giant and heavy gun. It's also good for piloting an AT-RT or other vehicles, and it wouldn't surprise me at all to see this body reused to make (or remake) other clones as we go. It has 14 points of articulation, but the added motion in the hips and wrists makes this one of the best figures in Hasbro's entire line to date. The figure is clean and white, with some special markings on the helmet. Clone fans should make sure to get one (or more) of these for their armies, it's really a nicely made product.

Collector's Notes: The figure has been doing very well so far-- it's assumed it will ship for a while, but who knows? It's been a slow Q4. A similar (if not identical) version will be packed with the AT-RT vehicle any day now.

"ARF" is an unfortunate acronym ... I can just hear kids finding this clone and exclaiming to their parents, "ARF! He's like a dog clone! Ha-ha!"

The ball hip design is odd, as the hip peg is diagonally mounted, ARF Trooper can "mount" almost anything, but basic sitting poses are pretty awkward. He really doesn't have the range of movement I'd normally associate with ball joint hips. It's disappointing in that regard, though most clones have disappointing hip articulation. Kenner's 1978 Stormtrooper could sit down, why is that so hard to replicate now with clones?