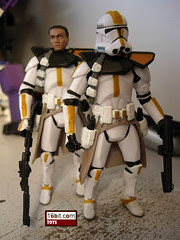 Bio: The clone troopers in the 327th Star Corps are led by Clone Commander Bly and serve with Jedi General Aayla Secura on several planets in the Outer Rim Territories. This elite corps is distinguished by the yellow markings on their armor. (Taken from the figure's package.)

Commentary: Hasbro has redone so many figures that in some cases, you can army build just by buying one of each unique release. The Clone Trooper (327th Star Corps) is one of these. Seriously. There's the 2005 Evolutions figure, the 2007 Target Battle Pack with 3 more versions, this one, and the 2009 Gelagrub rider figure, just for starters. That's almost a squad right there. The figure has 14 points of articulation, clean armor, a swivel (but not pivoting) waist, and a helmet that still doesn't quite fit. That's the big bummer about this mold, when he has the pauldron over his shoulders, his chin may stick out a little. Still, it's a decent figure, worth owning, and available in enough slightly different versions that you may as well pick 'em up at some point and build yourself a little squad of traitors.

Collector's Notes: This is the individually carded Legacy figure. Which is a repaint of the 2005 Evoutions figure. The 2008 carded Legacy figure is very, very similar if not identical to the 2007 Target-exclusive Battle Pack version. The carded version has two variants, one pauldron is brownish and the other better matches the stripes of the armor.