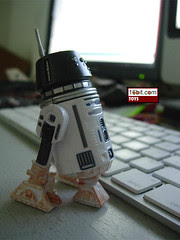 Bio: While on a routine patrol, Han and Chewie investigate the source of a strange signal, and discover an Imperial probe droid, which immediately fires upon the pair. When Han returns fire, the droid self-destructs - but not before it tells the Empire where the Rebel's base is located. As the Alliance begins an immediate evacuation of Echo Base, R2-M5 helps coordinate plans and K-3PO provides tactical support to hold back the Imperial forces. (Taken from the figure's package.)

Commentary: While some may disagree, I think this Battle Pack is one of Hasbro's better offerings, not just because of R5-M2 but the whole set is actually pretty solid. We're here to talk about this droid, though, which is a background design that-- let's face it-- nobody really knew or cared about until pretty much everything else started getting made. Hey, in this new era of toys, repaints are an inevitability and a lot of us dig the astromech redeco thing, so he's a welcome repaint of R5-D4, himself a retooled R2-D2. The figure has mostly blackish or dark blue panels, with some white for the body and a little grey mixed in for good measure. The figure still has the pop-up motivator, and a little red rusty dirt on the bottom for some reason. I never quite figured out why a snow planet droid would have quite this color of dirt, unless he just got off the boat from Geonosis or the Outback or whatever.

If you need more droids in your dioramas-- and you probably do-- this is a fine set to grab. This is the only figure in the Battle Pack previously unproduced, so it's kind of a bummer in that sense, but the other figures are pretty good and the Probot repaint is really slick. So yeah, I'd say get the set for R5 and keep it for the other figures.

Collector's Notes: This is a first-timer, only-timer. R5 repaints were just not done until after the first

non-attack, regular modern R5-D4 was done in 2006, so this is basically one of many new droids based on the design.