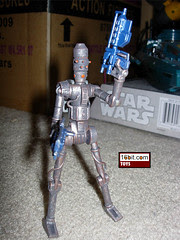 Bio: An IG-86 Assassin Droid lies deactivated in a Trandoshan trader's cargo hold until a buyer can be found for the dangerous droid. But he is accidentally reactivated by a clumsy astromech droid, and the lives of everyone on board the ship are in peril. (Taken from the figure's packaging.)

Commentary: Of all the droid figures, it seems Hasbro has the strongest affinity for droids like IG-86 (and his ancestor/descendants) as of late. This is the very first figure to use this mold, three have so far, and it looks like the designers went to town here. The legs have a ton of articulation including lateral hips, the hands can open and close, plus there's a nice level of grit. The dirt can be a pro or a con, given it didn't look too filthy in the show and a later release with more subdued damage looked more cartoony-- this one is almost realistic. (Not that this is a terrible thing, of course.) Few figures showcase this range of movement, and I would suggest buying some form of this figure just to get a good look at what Hasbro seems to be capable of doing these days. It doesn't hurt that it's a cool design.

Collector's Notes: The first shipments of this figure had grey blasters. Later ones have blue. The mold was also used to make Ziro's Assassin Droid and another IG-86 in the Ambush on the Vulture's Claw Battle Pack in 2009. No doubt, it'll be used to make another figure again. It's also worth noting that IG-88 appeared on the original Droids cartoon series in 1985, so it seems he's a good choice for cartoons given there's little backstory for the design as far as the movies and TV series are concerned. (The books are another, often goofy, matter.)

I think this is one of the best figures they have done for Clone Wars (aside from maybe the commando droid), and is a powerful argument to pick up the CW line; it's a great figure, tons of articulation, and a great sculpt. Hasbro's been consistently hitting on all cylinders in this line, and this figure is a perfect example. A caveat -- all of mine needed bases to stand -- but he's hardly unique in that regard.

I have all four variations of IG-86, but since it was such a peg "melter," I quickly tired of even looking at it. Makes me long for the bygone days of one and only one IG-88.