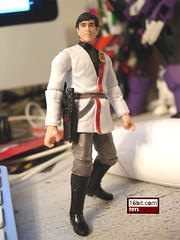 Bio: Wedge Antiles and the rest of Rogue Squadron are enjoying some R&R, but trouble soon ends their break. Acting-Emperor Sate Pestage is captured when the Empire discovers he's made a deal with the Rebel Alliance. Rogue Squadron is tapped to rescue Pestage, but Provisional Council member Borsk Fey'lya is hostile to the plan. (Taken from the figure's package.)

Commentary: Hasbro has an allergy to putting Wedge Antilles out at retail on an individual card. He's been packed with carry cases, in pilot packs, tossed with vehicles, and put in this comic pack-- and his one single-carded release was Internet-only. Clearly, he gets no respect, which is why they packed him with the dickish Borsk Fey'lya. Wedge also rarely gets an original sculpt-- every figure so far has recycled several parts from an existing figure, and this one is no exception. The hands and legs are from the Clone Trooper Trainee from 2007, just recolored. Poor Wedge, those legs kind of suck-- there's no ankle joints and they're a little lop-sided when trying to get him to stand up. Given that this is a dress uniform, legs that allow him to stand upright may have been a better idea. His arms have swivel elbows, and his uniform looks a lot like they do in the comic book-- which is to say fairly formal and correctly colored, with a really top-notch head sculpt. (Arguably, the best.)

So if you want a figure that looks good but can't stand up straight, this is it. The Rebel logo on his holster is pretty sweet, so I have a hard time not ultimately liking this one despite its flaws. There's enough good parts to make it worth your while.

All the flaws you mention are true, Adam, and yet, I really like this figure (despite the fact that he lists to the right). The design is well-chosen and as you say the head-scult is very good. He stands out a little on the shelf, which is always a good thing. Overall a nice effort, but, I agree, one that could have been even better.

I'm still seeing it on shelves in Connecticut, most recently this past Monday. Definitely not one of the rarer sets in these parts.