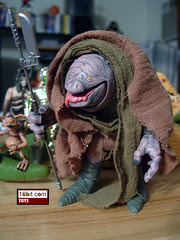 Bio: Hermi Odle is an expert at crafting weapons and helps fortify Jabba's palace against attack from the Hutt's many enemies. When Jabba attempts to execute the Rebels at the Pit of Carkoon, Odle defends the sail barge with a stun weapon. However, he accidentally stuns one of Jabba's skiff guards, thus inadvertently helping the Rebels. (Taken from the figure's packaging.)

Commentary: Few aliens have been on fan wish lists for as long as Hermi Odle, as the big, ugly Jabba's Palace aliens were not only recognizable, but pretty amazing. He's unusually big, requiring a specially sized blister on his package, plus he's fairly well detailed. It seems that he's not quite as amazingly decorated as Ephant Mon, but Hermi here does have an articulated mouth, cloth garments, ball-jointed shoulders and ankles, it's actually pretty swell given that odds are Hasbro could have just made it a statue and fans would have been happy with that. There's good paint on the wrinkles, the lazy eye looks fantastic, the tongue hanging out is a wonderful detail, really I could go on all day here. The quality is here, the character has never been done as an action figure before (or since), this is really one of those figures you positively must own.

Collector's Notes: This figure didn't stick around for too long, appearing with the Expanded Universe wave rather than with the Return of the Jedi in 2007. Odd, but hey, at least we got one now. If you like Jabba's Palace, this is one of those figure you really owe it to yourself to own. It's still generally pretty cheap, so get it sooner rather than later.

Email ThisBlogThis!Share to TwitterShare to FacebookShare to Pinterest
Labels: Jabba's Palace, Return of the Jedi, TAC

fantastic figure! I drenched him in water then positioned the robes around him. when it all dried, the robes stuck to his form better and look more natural posed.