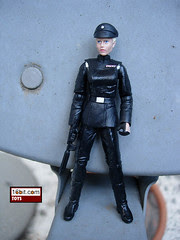 Bio: Juno Eclipse is the Imperial captain of the Rogue Shadow. She is appointed by Darth Vader to pilot his Secret Apprentice throughout the galaxy. Haunted by a tragic past, Eclipse continues to serve the Empire loyally while secretly yearning for a new life. (Taken from the figure's packaging.)

Commentary: Reusing tooling is a big part of Hasbro's master plan, and Juno Eclipse was originally created as a 2007 basic figure who, when the game The Force Unleashed got delayed, also got pushed back until February 2008. The game itself saw release in September 2008, meaning that this figure was clearanced out before the game hit stores... and a repaint of this figure hit before the original. How about that?

Juno is based on one of the outfits in the game, but not the one you see the most. It's a fairly standard Imperial uniform, complete with fully removable hat. She is super-articulated with 14 points of movement, but sadly the lower part of her top blocks the movement of her legs slightly. The sculpt is great, although her hair is a little pale-- or maybe it's her skin. Either way, she's just a little pale. It's a great design, and there are so few Imperial figures that it's great that Hasbro made this one. She's a perfectly fine Expanded Universe figure, although her other outfit in the game was slightly cooler and would probably have made for a better figure. Oh well! At least we got this one.

Collector's Notes: A "pre-paint" of this figure was sold as Deena Shan in late 2007. The figure was basically identical except for the grey uniform, and the hair was retooled on later shipments. Juno Eclipse was a rotten seller, some stores had tons of her left over after the line had transitioned to The Legacy Collection. She was a common sight on clearance racks for as little as $1.50. A new version of the figure with a retooled torso and open jacket is coming in 2010 as a Toys "R" Us exclusive, so if you just want a Juno, you may wish to wait for that one.