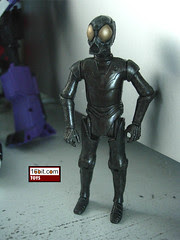 Bio: 5D6-RA-7, nicknamed Fivedesix by those around him, was an RA-7 protocol droid in service to the Galactic Empire during the Galactic Civil War. Five-D served as an aide to Admiral Conan Antonio Motti's staff. (Stolen from Wookieepedia.)

Commentary: As a figure that took a while to make, it's surprising that we got two versions of 5D6-RA7 at all, and it's a pretty awesome figure. It's not quite super articulated because of the bizarre elbow joints which result in some pretty funky movement. It's more droid-like, of course, but it may come off as stiff or scarecrow-ish. When fully assembled, he is jointed at the neck, waist, shoulders, elbows, hips, and knees. In other words, he's basically decent. The only real ball joint is the torso, and the limited movement of the elbows basically qualifies. The sculpt is excellent, and it's nice to have a figure like this that isn't made with the shiny wrap of vac-metal paint. The detail on the helmet is pretty good, although I did expect more detail in the mouth grill. The black paint deco looks a little weathered, but not too much, giving the figure a quasi-metal finish. If you have the means, it's absolutely worth getting.

Collector's Notes: This figure is a remake of 1998's "Death Star Droid." Same dude, new mold. It came with Wave 3 of the Legacy line, which was a series of repacks and repaints. Oh, and it's "5D6-RA-7" everywhere except for the packaging for the figure. The mold was also used to make MB-RA7 in silver.