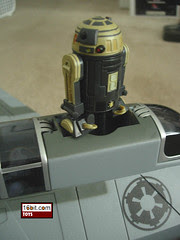 Bio: This astromech droid is the replacement for R2-D2, who is lost during a space battle. Anakin considers this new droid, whom he nicknames “Goldie” because of its metallic coloring, to be unreliable and mistake-prone. What Anakin doesn’t know at first is that the droid is also a spy. (Taken from the figure's packaging.)

Commentary: As a villain, a pest, and an adorable character, R3-S6 has the unenviable task of trying to be many things at once. Ahsoka immediately loves him, Anakin thinks he's a little punk, and the audience quickly sees him as a screw-up and, of course, a spy. Naturally, this was an easy release for the figure line in that he's recognizable and really easy to make. The figure starts with the base R2-D2 from the animated line and adds retooled limbs, as the holes for the rockets are filled in. (This looks better.) All the other original action features are here, including the opening panels with claws and tools, the retractable cable, the removable third leg, and the sensorscope. It's really fantastic to see another droid in the line so soon, but unfortunately he doesn't really work all that well with most of the vehicles in need of droids from a story perspective. (What's this "pretend it's someone else" nonsense?)

Since the figure is based on a recognizable design from the show, odds are fans are going to want to make sure they get this one. The original 2008 animated R2-D2 mold was one of Hasbro's best action figures to date, so it's perfectly sensible that this would also be a great figure. If you don't have any animated Astromech droids, be sure to get this one. Or another one. They're all pretty great. (Yes, all both of them.)

Collector's Notes: For whatever reason, this figure came and went in a hurry and as such is woefully gone from the market. It's not yet commanding premium prices, but who knows what will happen after the kids get the DVDs for the holidays. The director of the series colored him to match a favorite sporting team.