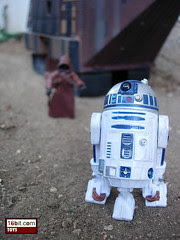 Bio: Scavenging Jawas find R2-D2 in the Jundland Wastes. They incapacitate the droid and attach a restraining bolt to keep him from escaping. The plucky astromech droid is then place in the cluttered hold of the Jawas' sandcrawler. (Taken from the figure's packaging.)

Commentary: For years, Hasbro has been asked by fans to make R2-D2 with a brushed silver dome to match the entirety of the line. You see, all the astromech droids have these greyish silver domes, but for some reason almost every R2-D2 had heavy flame or damaage markings and/or a shiny metallic vac-metal dome. As such, he stood out against R2-A6 and his many companions, so it's awesome to not only see Hasbro do the Vintage Original Trilogy Collection (2004) mold in a better shade of silver, but to also block up that annoying light-up eyeport. Truly, this is the best R2-D2 has ever looked based on this mold. Truly, this figure is something of a Christmas Miracle, but it came out in October so it was more of a Columbus Day Miracle.

The figure is, basically, the perfect modern R2-D2 in terms of deco and looks. Are there quibbles? Yes. But it's basically the best-ever individually packaged R2-D2 figure created based on the movies, so far. (The cartoon one from 2008 is arguably the best ever, period.) Since it's the same basic VOTC mold, let's point out the changes. First, the "panel" on the body is glued down, and has been resculpted with a Jawa restraining bolt as seen after R2-D2 is captured. The dome is a brushed silver rather than vac metal. The body has a little bit of dirt on it, but it basically clean. The circle at the top of the dome is black, not blue like it should be. This is because the mold for this piece is also the same as the central eye, which is now opaque black rather than translucent blue. The light-up eye port gimmick lost its charm about 10 years ago, so it's nice to see it going away for this fairly top-notch release.

Oh, and the lightning accessory is an awkward fit. Not totally disposable, but not as good as the R3-T7 one in terms of fitting well. This and the new Battle Pack R2-D2 are both good for different reasons, but this one I think is just a little bit neater-- the bolt and the fact that it was individually packaged helped it out a little. Get it if you can!

Collector's Notes: This figure is newish and shipping in a few cases, but its popularity may render it desirable down the road. However, it's more likely we'll see more figures like this, or ones that are close enough. The recently released Resurgence of the Jedi Battle Pack has an R2-D2 with similar deco but based on the R4-G9 mold, for example. The Resurgence R2-D2 and this R2-D2 are virtually identical in deco, except this one has the top of his dome as black, he has more dirt, and a square on the back of his dome is unpainted/silver instead of blue. Either is great, but the restraining bolt makes this release just a little bit better looking. Get either one, you'll be glad you did.

With all due respect to your enthusiasm, Adam, I'm happy to say that I did not "fall" for this figure. I have enough R2-D2s. I absolutely don't need any more. This is my "pre-" New Year's resolution: No more buying figures like R2 or 3PO or Vader, whose decos don't change.