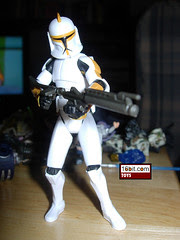 Bio: The clone troopers of the 212th Attack Battalion are distinguished by the orange markings on their white armor. Led by Clone Commander Cody and Jedi General Obi-Wan Kenobi, this unit includes a number of elite infantrymen trained for special missions. (Taken from the figure's packaging.)

Commentary: This Clone Trooper uses the same mold as pretty much every one since 2008, although this particular one is historically significant in that it's the first with the "new helmet." This redesigned helmet sculpt has a bit if a hole where his "chin" is, plus a slightly broader forehead. At first it looked really weird, but the truth is that it's truer to the animation designs. The figure itself sports the orange markings of Obi-Wan Kenobi's squad, so it's pretty swell-- add it to your army, get a bunch, etc. He has the same articulation as you're used to, so check out the other FOTDs for the specifics.

Collector's Notes: This figure came and went pretty quickly, but it's assumed we will see it again due to the sheet number of them on the series. If not this one specifically, other members of the battalion should see release eventually. Similar troopers were sold as deluxe figures with jet packs, and another 212th Clone with the original helmet sculpt was shipped in a Target-exclusive Battle Pack in November of 2008. So you can probably make a pretty good 212th Squad at this point.

So maybe a 3rd time they'll get it right.