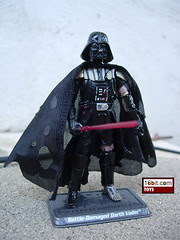 Bio: A fierce battle with the newfound Rebel Alliance aboard the Death Star has pushed Darth Vader to the brink of defeat. Beaten and broken, the Dark Lord of the Sith is the closest he's come to death since Obi-Wan Kenobi defeated him on the burning shores of Mustafar. (Taken from the figure's package.)

Commentary: This figure is both really cool and really maddening. Battle-Damage Darth Vader is a heck of a neat idea, visually very interesting, and packed with 14 points of articulation and removable armor bits. It's quite a nice toy, plus there's a tattered cape to simulate the whole getting his butt kicked thing. That's also part of the problem, for the most part Darth Vader is presented as this astounding warrior, a nearly unbeatable foe. The game The Force Unleashed allowed you, the player, to wail on him pretty severely, and this toy represents that. It's neat because it's different, and sort of weird in terms of timing. The costume looks like a damage original trilogy (ESB/ROJ) suit, but it takes place right before the original Star Wars, and it seems the armor in the EU never quite matches that. The paint is solid, the exposed wires are a nice touch, but the one thing that bugs me about this one is the lenses in the helmet don't quite match up with the eyes on the figure, which uses the Sebastian Shaw-style head. (This is weird, because the Star Wars-based removable helmet Vader has Hayden's head. And this is before that.)

The figure has great articulation, and while the plastic skirt under the cloth cape does hinder movement somewhat, it's more of a display figure than a Starfighter pilot figure. The various bits of armor mostly stay on just fine, although the "sleeve" piece does fit awkwardly. Vader has no problem hanging on to his lightsaber, and he plus into his stand perfectly. This is one of my favorite figures just because it's such a good take on the character, but again, I do dislike it when he's presented as less than an indestructible monster. Ah well. Still, a great figure, well worth owning in your toy stash. Besides, it's not like there are many unique different Darth Vaders you can do, so this one is a nice, new, and different release... even if it is basically the same kind of thing as the Evolutions figure.

Love your figure of the Day thread. First time commenter.

Perhaps the ROTJ/ESB suit makes sense for the TFU. I mean, this suit was pretty much busted up beyond repair. Maybe Vader ditched this suit after the fight and was given a new one; the one we see in ANH?

Why the gold paint, though?

There's no non-damaged Vader with gold.

Long time FOD reader and Adam is still gettin' it done...Love FOD and love Battle Damaged Vader. Takes a figure you can only release SO many times and gives you a new kick-ass (actually ass-kicked) design.

Good point on the Sebastian Shaw vs. Hayden head, but that barely detracts from the sheer AWESOMEness of this figure.