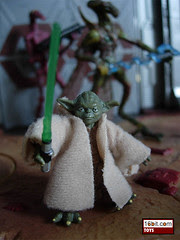 Commentary: This particular Yoda was not, as we had thought, a reuse of the 2005 figure. Rather, it's a clever rework of the 2007 Yoda with Kybuck figure. Now, he has a new cloak closer in look and feel to the 1980s action figure, and the articulation is good but not exceptional. The feet are not jointed, and this Yoda has an unusual leg design specifically created to stand on the back of a Kybuck. On his own, it's a little strange and may benefit from stands of some sort. The deco is excellent, with the paint on his head bringing a lot of personality to the character. The cloak doesn't get in the way too much, plus it does make Yoda feel nicely retro. Along with Mace Windu, this Yoda is one of the downers in the Geonosis set simply for not bringing much new to the table. Those without a Yoda could do worse, but they could do better too. As such, get this one if you're so inclined, but this is one of those rare instances where Hasbro really should have included a build-a-droid gimmick just to make this one a little more exciting. It's lovely that Hasbro keeps putting in good effort on these reissues, but it's a shame they didn't throw another more exciting Jedi out there instead. (Of course, Yoda will easily sell, so it's not like you can really blame them.)

Collector's Notes: Due to Yoda's not being too great and the Destroyer Droid being arguably inferior to the 2007 release, this is one set you could probably skip unless you're a fiend for Yoda variations.