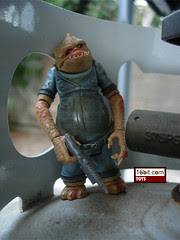 Bio: The Trandoshan trader secretly makes a deal with General Grievous to deliver R2-D2. (Taken from the figure's packaging.)

Commentary: This is one of my favorite figures of the year. No joke. Gha Nachkt is a completely new sculpt, and is essentially a shorter, dumpier, fatter, greasier Bossk. How can you not love that? Voiced in the series by the fantastic Ron Perlman, Gha's figure is packed with personality. He's got a bad eye, a droopy face, really nasty overalls, and a lot of articulation-- even ankle joints. Due to the fact he has legs similar to those of Cotton Hill (i.e., no shins), his legs are pretty stumpy and this gives him a unique perspective given his huge arms and his species' penchant for being, well, huge. The scaley skin is really well-represented, he has no problems standing (but sitting isn't really an easy thing for him to do due to how his hips were designed), and he's a bit of a sad sack. There are so few figures from Hasbro that are fat, or too short, or in some way kinda disgusting that this one is a real joy. The perfectly-sculpted heroes and villains of The Clone Wars have fantastic builds and perfect bodies, so Gha Nachkt is a real breath of fresh air in the same way as Whorm Loathsom's different body type. These cartoony figures really set the line apart from most of the figures in the past decade and a half, and this figure is, to me, the single best argument to collect Hasbro's newish cartoon line. If you buy cartoon figures, you owe it to yourself to get this one.

Collector's Notes: This figure is presently exclusive to this gift set, and was the only new sculpt in it. The IG Droid in the pack is slick, because the paint looks more cartoony than the carded release. We'll look at him later. Overall, I really like this set for what it is-- which is to say, mostly rehash with one really cool new figure.