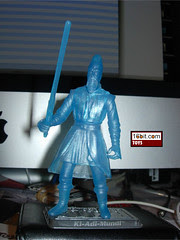 Bio: During the battle of Coruscant, Jedi Master Ki-Adi-Mundi is assigned to lead a strike team to battle the droid armies stationed on Mygeeto. He appears to the Jedi Council via hologram and reports on his progress. He fights bravely until his clone troopers suddenly change and turn on him. (Taken from the figure's packaging.)

Commentary: Hasbro has understood the importance of getting the most out of a mold for quite some time now-- look at Transformers, for years nearly every mold got at least one repaint. Applying this to Star Wars, there are precious few figures you can just slap a new coat of paint on and get some other new figure from it. Thankfully George Lucas pitched in and added characters like Holographic Ki-Adi-Mundi to the movies so Hasbro could get one more squeeze out of the mold, without paint to boot. Hasbro took the 1999 Ki-Adi-Mundi, gave him a newer lightsaber mold, and cast the whole thing in clear blue. He can't sit, and he doesn't have the definition or slight coloring like he does in the movie either. So really, this is a figure that personifies (plasticifies?) the very idea of a cheap repaint.

Really all he can do is stand around since he has six points of articulation and his lower robes block most leg movement. I guess this could also serve as some sort of ice sculpture, too. As line filler it's more interesting than, say, a straight reissue. Still, a reissue might have sold better, given that the audience for a normal figure is slightly larger than that for a frozen blue Jedi-sicle.

Collector's Notes: Some holographic figures enjoyed brief success as collectibles. Most go on eBay and can be bought for a song. Care to wager a guess on this one? I actually segregated the holographic figures in a separate container so they're not mixed in with the painted ones for some reason. It just seems like they should be kept away from the real ones.

Too bad about this cheap repaint. There goes the opportunity for kids/collectors to re-create the Jedi Council scene in which a holographic Ki-Ad-Mundi is seated.

I got him anyway, since I don't open the figures.