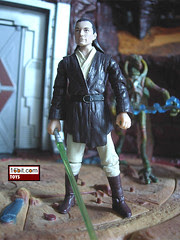 Commentary: One of the things that remains both delightful and disturbing is that Hasbro can crank out figures, the names of which many of us don't actually know. If I showed the bulk of you Joclad Danva out of context, it's a pretty safe bet a lot of the people buying him wouldn't know him from any other comic book Jedi. (Don't worry, I'm one of you.)

As an extra in the background of a major battle scene, he doesn't draw a lot of attention to himself or have any lines, plus he reuses the body of a Luke Skywalker figure from the novels. So arguably, he's not entirely authentic to the film, but pretty close-ish. (I believe I heard the actor was taller, too.) When it comes to some of these minor characters, apparently, we're going to have concessions. Which is a shame, as some of the other prequel Jedi bodies probably would have been slightly closer to the right build and outfit, but oh well- this is what we got.

The head sculpt is good, and the 14 points of articulation are certainly decent. The blue lightsaber is nice enough. As this will likely be the only version of this character you ever see as a toy unless he shows up in a big way on TV, well, why not get it while the getting is good?

Collector's Notes: Either Target's roll-out of these is staggered, or they're going to be short. It's too early to tell, but I've not seen many of these yet. As such, I say grab it if you have the means. There are no other Joclad Danva figures to worry about, so you may as well pick up this one.

This guy was one of the two major selling points of the entire Geonosis Arena set. He and Roth-Del Masona are particularly noteworthy because of their dark brown Jedi tunics.