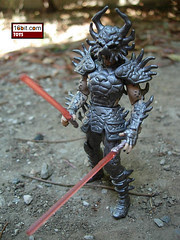 Bio: Darth Krayt is not pleased; Admiral Stazi of the Galactic Alliance Remnant has stolen the Sith Lord's powerful new warship Imperious. Unknown to Stazi, Imperial Knights Sigel Dare and Treis Sinde have sabotaged the ship, hoping to ruin Krayt's plans. Now Dare must warn Stazi before the bombs planted on the ship explode! (Taken from the figure's packaging.)

Commentary: As fans tend to like Sith Lords, it's a wonder Hasbro hasn't gone crazier with figures from the Legacy comic series. (Which, I should add, has no real relation to the action figure line called The Legacy Collection.) The big bad wolf of the series is Darth Krayt, first introduced as a mighty armored villain and later revealed to be A'sharad Hett. (The spoiler window is a year, tops.) Fans have been asking for a figure of the character for a while, and now that we have one it's a really mixed bag. For example, he has a removable mask and can store his twin lightsabers on his back-- that's pretty cool. Unfortunately, the helmet is tough to get off, his left hand was not designed to hold a lightsaber (for a character that wields two, this is a flaw), and his tattoos don't quite match up with those of his younger self. Maybe he grew some new skin?

The figure has a lot of detail but is lacking in painted highlights. The entire body is basically a silvery grey, while, while OK, seems off model because in the comics he's depicted wearing this strange, living armor. (You see, his armor is borrowed from the Yuuzhan Vong species, where everything is biotech and can sneeze and stuff.) As such, this looks more like some space samurai than an alien life form suit. The sculpt qualifies as good enough, except for the hand, and overall Hasbro crafted a pretty good figure. Sure, he can't sit, but does that surprise anyone these days? All the ridges and nubs on the armor and skin are nicely done, and if you leave the helmet (and the hand rubber bands) on, the figure will probably serve you well. Mine had the shoulder armor fly off as soon as I opened it, so as a toy figure, this isn't a real high mark. So in other words, it falls short on being a toy and on being a nice collectible figure, so if you get one and leave it in the package you might be the best served here.

Collector's Notes: So far this figure and all the red-carded Comic Packs have been somewhat tough to get. With only two waves released in 2009 and the Fall 2009 waves not showing up for pre-sale anywhere yet, it should come as no surprise that Hasbro is planning to eliminate this assortment in the coming year.

One heck of a t.v. tray you got there.

Is it definite that the comic series is being dropped? Too bad about that, it was tracking some of the more interesting aspects of the contemporary SW universe. Do you know if they will release the ones they previewed over the summer (especially interested in Darth Nihl and Deliah Blue)? I would hope that they are in production somewhere and will still make it out.