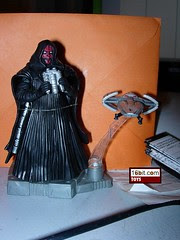 Bio: Following orders from his Master Darth Sidious, Darth Maul easily tracks his Jedi prey by traveling in his Sith Infiltrator equipped with a stealth cloaking device. (Taken from the figure's packaging.)

Commentary: In 1999, it seemed obvious that Hasbro was going to need to find a way to do a ton of unique Darth Maul toys. He was the most popular character in the movie, despite having few lines and little to do other than fight or snarl, but we all dug him. This particular figure is molded to look like he did in a scene before he sends off some probe droids. Since all he really did was stand around menacingly, it isn't too surprising that this newly sculpted figure doesn't have a ton of articulation. He has a moving neck, plus joints at the shoulders, hips, elbows (swivel), and waist. His arms are the only really meaningful joints, allowing the figure to hold his binoculars and look through them. That's about all the action this figure is going to give you, which shouldn't be surprising as he ships in something called a Trophy Assortment, of which he was the only memeber.

The sculpt is excellent, but the paint could have been better. The robes have a lot of detail, and Hasbro even sculpted the super-long double-lightsaber hilt to his hip, which you can see on the robes under his outer robes, so you almost can't see them. There's a lot of detail under the larger outer cloak, were Hasbro so inclined they could sell the figure with a different head and minus that cloak and it'd be just fine. The head has a hood sculpted on it, and its paint is a little weak-- the red is too dark, and the detail is pretty middling. The figure itself is almost 100% black, without any gloss on the boots or anything special on the gloves. There is a silver droid caller sculpted to his wrist, and the lightsaber hilt was also decorated.

This isn't a figure to play with so much as it is one to admire on a shelf. It looks really cool with the tiny repainted MicroMachines Sith Infiltrator standing next to him, and I wish this continued. A tiny vehicle with a figure was a great idea, and if Hasbro made more of the stands, which can hold any Star Wars MicroMachines vehicle, I'd have bought a bunch to set up figures with their pilots. It was a really clever and creative idea that just came at the worst possible time at a pretty awful price. When this hit for $12.99, a basic figure cost $6.99, and included a stand and accessory. In short, Kay-Bee charged fans an extra $6 for the MicroMachines vehicle, which was about a $2 value at the time.

Collector's Notes: This figure was a weak seller in its day and was supposed to be the first in a series of "trophy figures," which was actually a really swell idea. This one didn't move, and as such the subsequent figures-- Obi-Wan Kenobi and OOM-9, each new sculpts with repainted MicroMachines vehicles-- never hit stores. Interestingly, the figures were tooled and were never actually produced. None seem to be on eBay at the time of this writing, but online stores that have them are charging $10-$15 for them. Factor in 10 years of inflation, and that's a price drop.

Got this on clearance back in the day for $3 I believe, maybe $5?