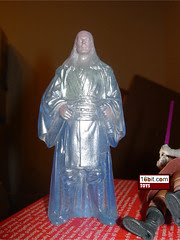 Bio: In the days of the old Republic, a direct communications system was introduced to give those in power a way to quickly relay vital information to where it was needed. As part of a comm-unit communication, this 3-D, visual system uses advanced holoprojectors which enable the user to transmit and receive messages within seconds. (Taken from the figure's package.)

Commentary: This barely qualifies as a figure. It's the right scale, but Qui-Gon Jinn has no articulation. I don't mean "it doesn't move much," I mean the whole thing is one damn solid piece. This clear blue figure has some painted details on his face, specifically a fleshy color, to better simulate the look of the holographs in the prequels. It's a little off, but it's slightly more accurate than the clear blue and purple figures we've been getting steadily since about 2005. As figures go, this thing is a statue. You can look at it, and that's about all. It's pretty cool to have it with the light-up communicator base as an action feature, but again, it doesn't do much. The base itself is pretty neat as a sort of prop replica, but the ability to spin the figure when you want isn't much of a fun play feature. It was a neat idea, but it's no wonder that this line was abandoned after the first two figures It's a neat curiosity, but hardly worth shelling out a lot for.

Collector's Notes: I picked my first one up at ten bucks. I also picked up more on clearance at $0.50 each. These weren't popular items, and have never been rereleased. Get them cheap if you get them at all. As in, not worth the ten bucks.