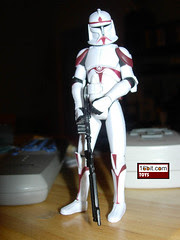 Bio: Under the command of Commander Fox, these elite clone troopers guard the security of the planet during the Clone Wars and protect important dignitaries and leaders. (Taken from the figure's packaging.)

Commentary: The Clone Trooper (Coruscant Guard) shows how to do a Clone repaint right, and cheap. Of course, the days of 5-figure Battle Packs are now over, but this one included 4 of a new Clone plus a Yoda figure for a mere $22, which, today, sounds like some sort of beautiful dream. This figure was designed to be part of Fox' crew from the end of The Clone Wars movie and, not surprisingly, uses the same Clone body we're all used to, before the helmet revision. It is what it is-- pretty cool, pretty red, and a squad in a box.

Collector's Notes: If you missed this set, you're probably sorry. It was a nice set, and so far this particular clone was only available in this exact set. Thankfully, as of today, its eBay price is still pretty reasonable-- roughly retail, which is still a bargain for what you get.

Even though I got one of these (clone fanatic, guilty as charged), I would still love to see him re-released as a basic carded figure so people could army build with this cool unit. Though, face it, what Hasbro could do to clone fans with this series is scary.